Well we returned to Cornwall refreshed after a fabulous weekend in Twickenham, hosted by Pete and Barbara – it was SO good to eat, drink and be merry with so many of the family for three days, many many laughs.

We arrived in Porthleven on Tuesday afternoon and really enjoyed our stay there.  It’s similar to Padstow but without being swamped with tourists.  We dined out at Rick Stein’s restaurant in the evening – very nice too!  Stayed with a wonderful lady Trish whose airbnb was a real home from home.  Had a great night’s sleep in the sumptuous bed and Egyptian cotton bedding and left after a hearty Cornish breakfast – Steve’s plate was so full I’m not sure how he got up from the table.

So today’s walk was classified as ‘moderate’ and it was just that … and it was spectacular to say the least.  I would say that visually this is my favourite bit of coastline so far – not such family-friendly beaches but for walking and sightseeing you could do no better.  Grass covered cliff tops, magnificent coves and the colour of the sea today – you could have been in the Med. 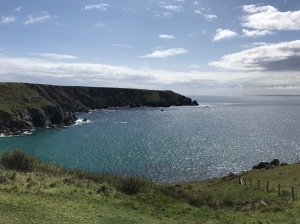 Everything perfect … except on reaching Lizard Point (1) we got drawn down to the beach area instead of sticking to the higher path – so this involved a steep descent down some boulder type steps and (2) we walked on further (this is because our accommodation for the night was some way beyond and we thought it would be manageable to do the extra).  After 8 hours of walking what turned out to be nearly 20 miles, we wearily stumbled into Cadgwith Bay – a picturesque fishing village with a fabulous pub.  After comforting ourselves with fish and chips and alcohol we made our way up the hill, another mile to our airbnb in Ruan Minor.

So, apart from the crazy distance, the terrain was not scary today.  My biggest challenge was the cows (after our conversation the other night Caitlin!) – we had to walk through field after field of them.  Some walkers were stopping to take selfies with them – not me, I walk briskly and I have my very pointy walking pole which I would not be frightened to use.  One did walk towards us making full eye contact and Steve had to make himself even larger and shoo him away.  They’re obviously quite intelligent cows in this part though as the farmers leave them to graze so close to the cliff edges – didn’t notice any falling off!!

One thought on “An absolutely stunning walk – Porthleven to Lizard Point…… and beyond!”