So the last few days have drifted by in the blissfully relaxed routine we seem to have established here in Benalmadena. Healthy eating, walking/running/yoga, daily chores, beach time, swimming, reading, early nights, late mornings and the occasional sundowners and dinner out. So no road trips this week, or city sightseeing … just a chilled few days to round things off nicely.

Had a great last night out in Benalmadena Pueblo, taking a last look through the beautiful cobbled streets and shops with their pretty Easter displays. Settled in the Plaza de España for dinner where we were perfectly serenaded by some local singers. 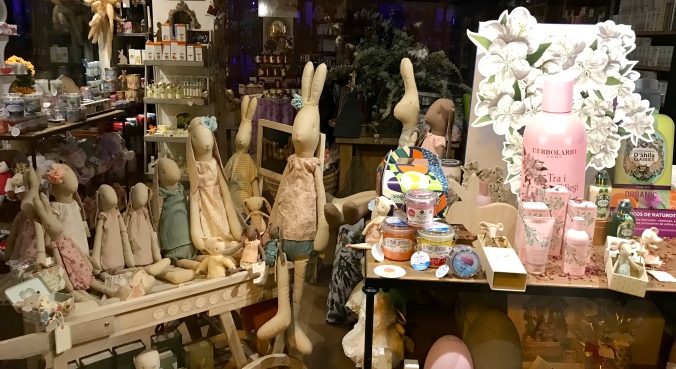 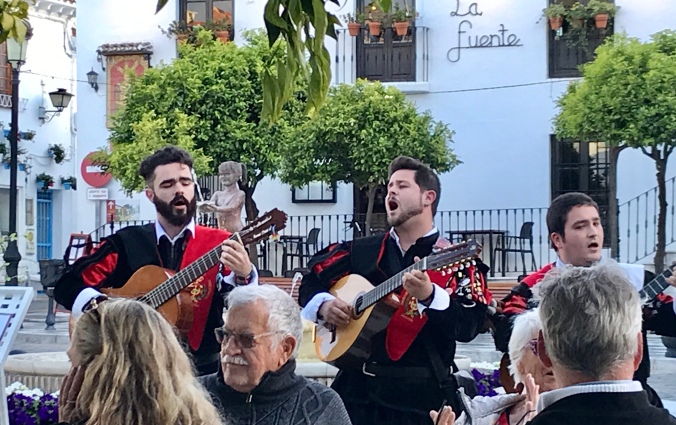 Now as we sit in the airport awaiting our departure, I’m already reminiscing about the things we will miss:

1. The tapas – definitely our favourite way of eating.

2. The wine! We have always loved Rioja but particularly love the prices here! And I will miss my perfectly chilled vino (pronounced Beeno – can’t believe I’ve only just learnt this, thanks to Alice!) blanco being served in small delicate measures in large balloon glasses – heaven.

As you can see we’ve been busy over the last 6 weeks!

4. The wafts of Spanish cologne from Spanish women and men.

5. The pretty whitewashed houses with their terracotta roof tiles and potted geraniums, prettily contrasting with the blue cloudless sky.

6. The lush mountains that wrap around Benalmadena and Fuengirola, an ever stunning spectacle.

7. The parakeets – often invisible to the eye but deafening to the ear, camouflaged in the promenade palms. 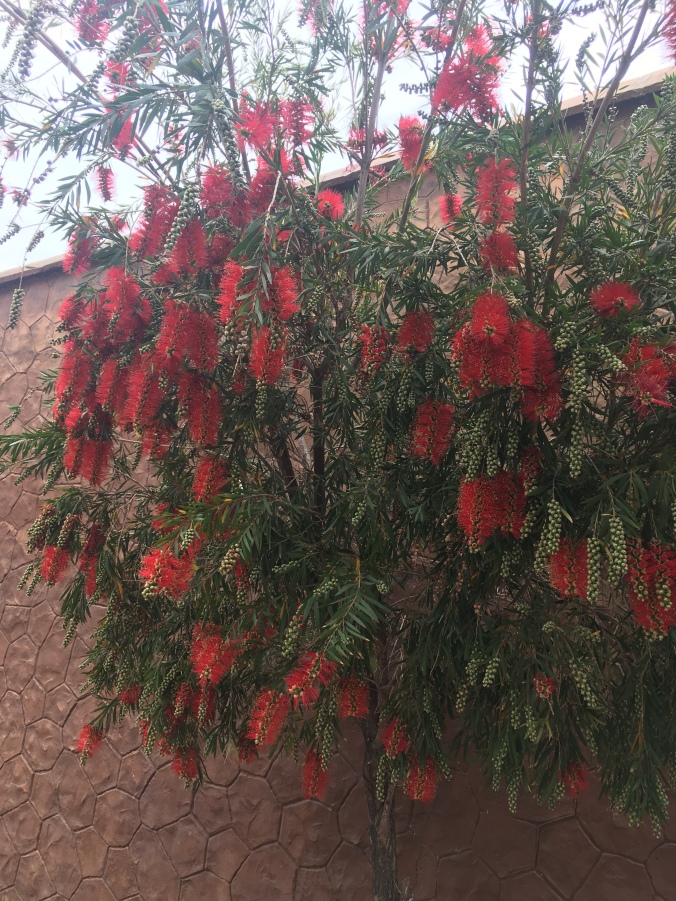 Having said all that we’re really looking forward to being home too – some special family time and catching up with friends. Also getting back into Redway Runners, Parkruns and yoga classes. We’ll be home for 5 weeks and then we’re off to Norfolk for 3 months – house-sitting and coastal walking. 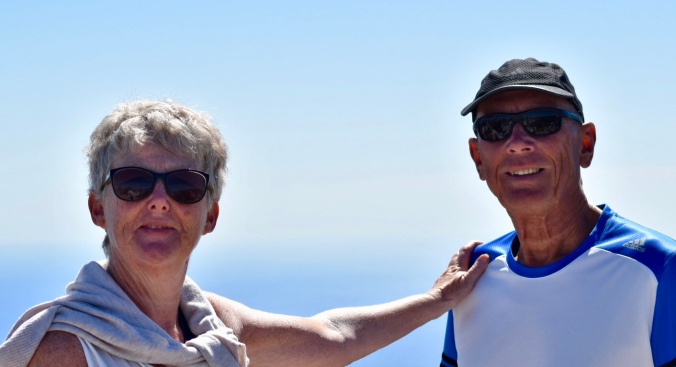 Well, Alice certainly left us as she found us – she arrived on Saturday night in torrential rain and when we left the apartment on Friday lunchtime it was bucketing it down!!  Luckily in between we had plenty of sunshine … and plenty of fun …. beach-time, swimming, walking, shopping, eating and drinking, sightseeing – a very special time together.

We had a late night on Alice’s arrival on Saturday – we didn’t get back to the apartment till gone 11 and so were up till 2.00am for our first night catch up, accompanied by a Cava session naturally!  We all got very confused with our times that night – we knew that British time was changing but we had no idea that Spanish time changed too!  The next morning all our clocks and watches were saying different things so it took us a little while to work out just HOW late we had slept in.

But of course it was Mother’s Day – so in fact today was all about me!!  A lovely start – banners, cards & presents, messages, delicious breakfast …. not such great weather but hey ho!!  After breakfast we went for a walk along Benalmadena beach – the clouds were still around so a lounge or swim were out of the question.  Took Alice to the marina shopping area – she needed her retail fix!  On the way back stopped for coffee and churros – wow, my first time – they’re scrumptious.  The weather started to cheer up a bit too – yay!

Mid-afternoon we headed up to the Benalmadena Pueblo for a Mother’s Day tapas crawl.  We tried out a few bars/cafes – delicious food, delicious wine … perfect company and so relaxing.  The sun shined most of the time but we ended with a spot of rain.  And we missed you Tom …. but otherwise it was perfect. 💕 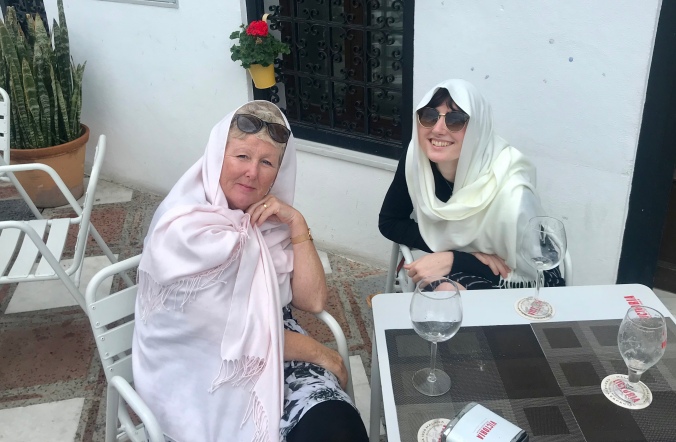 Sheltering from a spot of rain

On Monday we were going to do the cable car ride but again it was quite cloudy, plus it was April Fool’s Day, so we thought we’d do it another day!  Instead we took the train into Malaga – wanted Alice to see the city and there were still things we wanted to do there.  Well, I say ‘we’ – cultural experiences are not always Steve’s first choice but he does join in sometimes!

Walked down to the port area with its fancy shops and cafes – stopped for a bite to eat and guess what …. it started to rain.  Can’t believe after the 4 weeks of sunshine we’ve had, how unlucky Alice is.  But we soldiered on – our first stop (via a few shops of course) was the visiting Van Gogh Alive exhibition – a multi-sensory experience, portraying the artist’s life and works.  It was just amazing – the images at enormous scale filling giant screens, walls, columns, ceilings and even the floor … and accompanied by such powerful classical music.  Even Steve was enthralled! 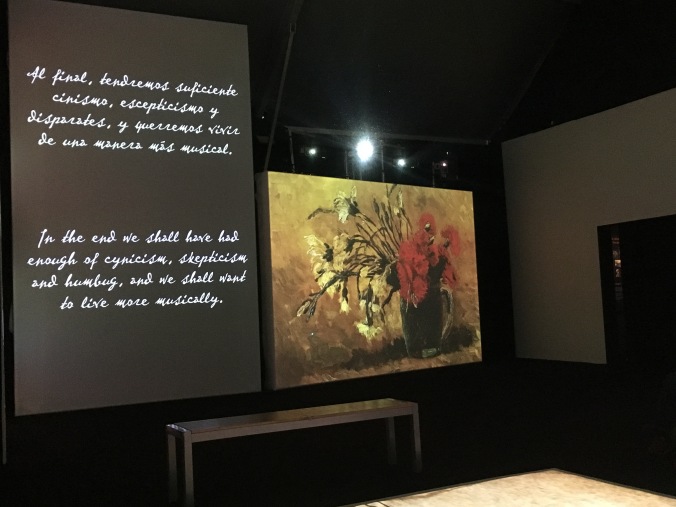 On leaving the exhibition we headed for the city centre – weather was cheering up.  We walked along the beach promenade and then up through the winding city streets until we came to Malaga Catholic Cathedral.  Our next ‘cultural’ stop.  And with audio guides in place, we set off to enjoy this magnificent building –  with its range of architecture styles and stunning artworks … not to mention a truly religious experience.   It is nicknamed ‘the one-armed lady’ as the 2nd tower was not completed.

Steve was on cultural overload by this time so opted out of the next visit to the Picasso Museum – Alice and I went alone.  Not my most favourite of artists but being a local lad felt it was important to visit … have to admit there were many exhibits where you just wanted to say that classic line – “I could do that!”  – was quite pleased Steve hadn’t come in!  But some talented pieces all the same.

Now with the cultural bits done and dusted we hit the bars.  Sensibly started off in El Pimpi for some good nourishment.  Alice took this to the extreme with the largest plate of meat you have ever seen – clearly taking a break from her vegetarian lifestyle! 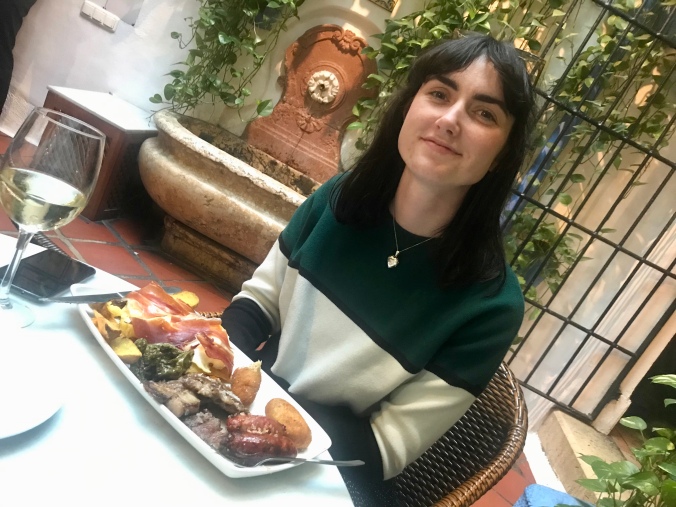 A plate of meat!!

A few more bars including our favourite sherry bar – Antigua Casa de Guardia – where Alice got to sample some deliciously fine, sweet Moscatel. 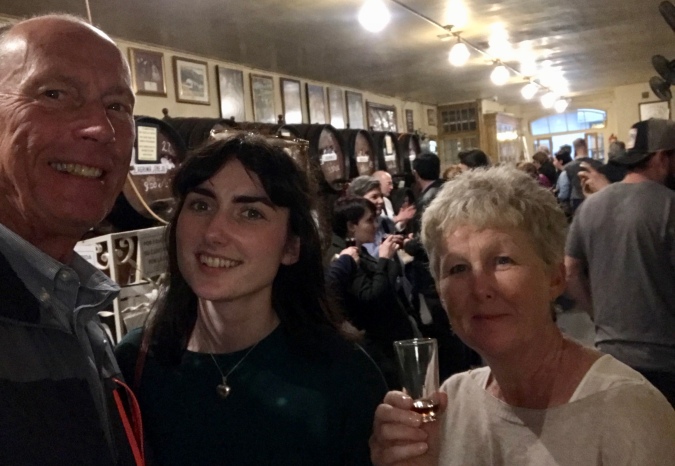 Believe it or not, on Tuesday we all woke up to blue sky and sunshine (not to mention a fuzzy head)!    There was only one thing for it – head to the beach.  Drove to Fuengirola, Steve went for a run and Alice and I wandered off to the market.  Alice was fascinated by the size of it and we picked up some real bargains – trousers, tops, bags and shoes … lots of fun bartering.  Then we hit the beach for the rest of the day and truly relaxed.

Wednesday was much of the same.  Our itinerary had us down to do a road trip to Nerja but Alice was in favour of staying local and relaxing on the beach …. and why not when you only have a few days off work.  So, relax we did … and read, and snoozed, and swam and enjoyed our picnic lunch.  Home and showered and then down to one of the Benalmadena beach restaurants for dinner.  Alice got chatted up by a lovely waiter with minimal English and even more minimal teeth!!  We shared a fabulous paella – our first since we’ve been here so another tick off the list.

On Thursday we could put it off no longer – we had to face our fears and head for the cable car ride from Benalmadena to the top of Monte Calamorro.  We joined the queue and watched as each party embarked on the journey.  I had no idea the pods (or gondolas as they call them) would be so small.  The two other cable car journeys I’ve been on in South Africa and Sydney have been substantial carriages – these were like something off a ferris wheel.  As the people in front of us boarded I noticed that their gondola had the number 12 on it!!  I can tell you now, there was no way I was getting on if a number 13 turned up.   As it happened it was number 16 – Steve was hilariously delighted in suggesting that maybe 13, 14 and 15 had fallen off!

But bravely we boarded – me with my claustrophobia and Steve with his fear of heights … poor old Alice was like our carer, supporting us every inch of the way.  After the initial swinging and bumping we soon adjusted to the ride – the views were absolutely incredible.  And at the top even more so, looking over the Costa Del Sol in all its glory.  We went on one of the many walks which took us even further up … and we had a slippery descent as Alice and I hadn’t worn the most sensible of shoes! 😚 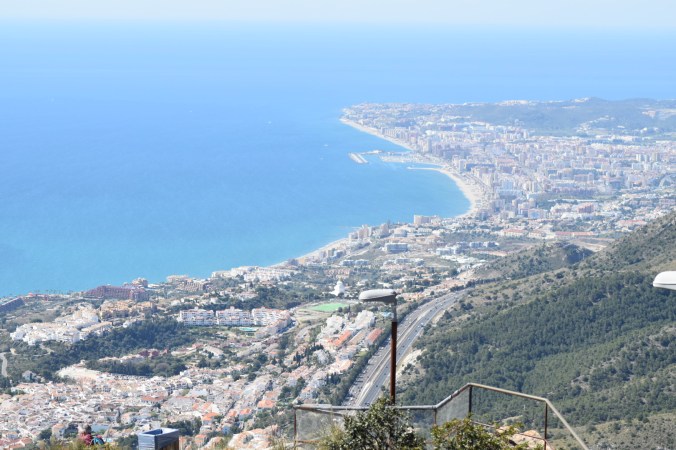 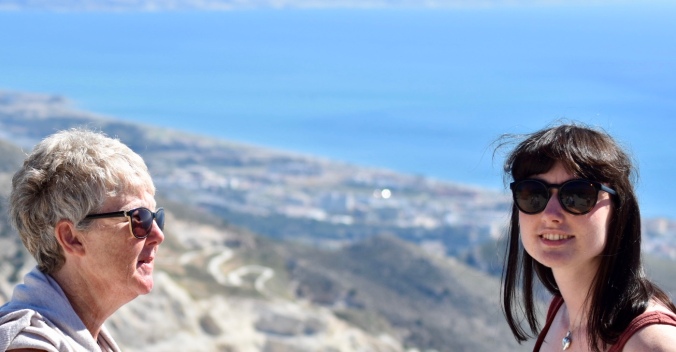 Going down it felt a little bit speedier but Steve said he just wanted to get to the bottom as soon as!!  Having been such brave soldiers we rewarded ourselves with some beach time and then a delicious beachside meal in the evening.  Steve and I enjoyed barbecued Sea Bass … and Alice fitted in another meat fest (a fillet steak) before returning to her chosen vegetarian life in Manchester!

And so Friday came around all too quickly – it was time for Alice to pack her bags and leave us.  And it was raining – how miserable is that!?

We were going to have lunch in our favourite square in the Pueblo but it was far too wet for that – so we opted for an indoors restaurant pizza instead – it may be Italian but it was just the job and cheered us up.   And then we accompanied Alice by train to the airport, by which time the sun had started shining – timing is everything!

It’s been such a fantastic week – thanks for coming to join us Alice … for keeping us company, making us laugh, helping us with the Spanish lingo, sorting out our technology needs, caring for us … just being you.

And in my favourite new phrase you taught me “hasta luego!” ❤️