Today was the day of two walks, which bearing in mind the last few days was something of an achievement!  It’s the weeekend where we’re travelling to London for a family get together so it was necessary for the logistics to get another day knocked off the list.  Volunteers were called for this epic journey of almost 20 miles and the ‘big fella’ stepped forward to take up the challenge.

Now it’s fair to say that before starting the walking lark I had been under the impression that either before or after the walk I would also run a few miles, to keep my hand in you might say?  There is absolutely no chance of that happening as the terrain we cover is so draining physically that once finished walking your last ounce of strength is required to drag yourself off to the pub.  This is a graph of the ups and downs of the walk from Lamorna to Porthleven yesterday, a tad under 20 miles, spectacular scenery but in a lot of places treacherous under foot, so a real case of one foot in front of the other and watching every step:-

Within the 20 miles I did manage to run a couple of miles and between us covered the distance in about 5 hours, the lovely Dee joining me for a celebratory march along the promenade between Newlyn and St Michaels Mount, where very cleverly she turned right and became a tourist for the rest of the day.  The ‘big fella’ then continued for another 11 miles taking loads of beach pictures, you can never have enough can you?  Luckily I’m not posting many of those but a few of the different things I saw on my illustrious journey, the first being a field of newly planted cabbages (I think),  there’s something about the straight lines:- 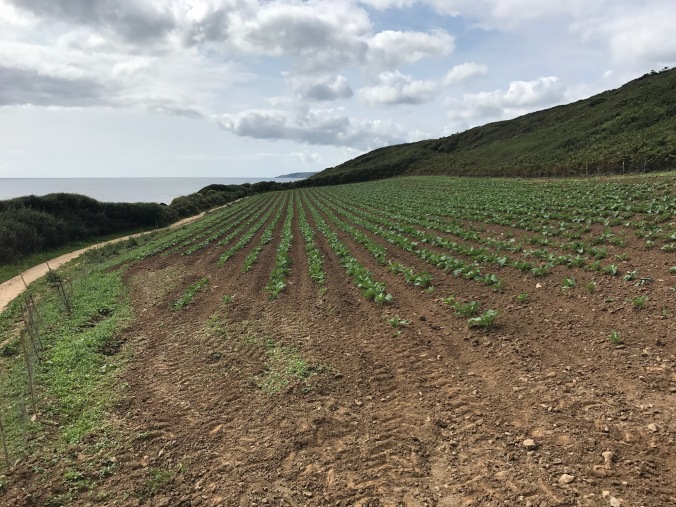 Also came across the equivalent of what us “inlanders” would consider as crop circles, couldn’t resist a beach shot either:-

Having completed the extra miles can you imagine my delight in walking into Porthleven to find a bus coming round the corner that I was able to jump on for the return journey to Penzance for our overnight stay.  Whilst out and about yesterday you come across some sights of great individual/team efforts and I include randomly a couple of personal highlights, the first being a two houses in a very narrow Marazion street (buses pass within inches!):- 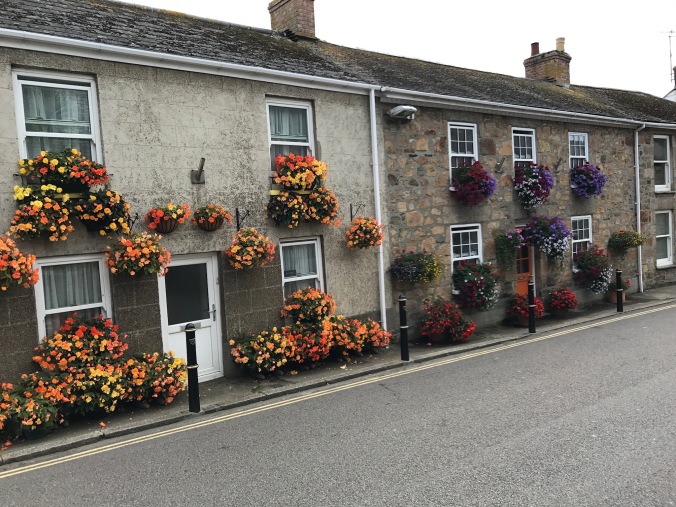 Finally as I’ve mentioned a few times before this coast has incredible history of shipwrecks, plane crashes and contributions towards the two world wars and locally there is considerable effort put into remembering these heroic feats, this latest memorial being on a cliff top just outside Porthleven commemorating Mariners lost over the years along this coast:-

Onwards and upwards we now move on for a few days to the family function in London, we are flying into Gatwick from Newquay, how cosmopolitan does it get, although we are carrying our rucksacks so reality is not far away!