So our hosts Prue and Nigel had promised us that we would really enjoy today’s walk … that compared to the last two days it would be a pleasurable one.  What is wrong with these people – do they mean to be well-intentioned or are they actually sadistic!!?  It was not a pleasurable experience by any way shape or form!   You readers must be thinking, why are they doing it?  I can assure you after today we are seriously questioning ourselves too!!

Again a delicious breakfast served up by Prue and some interesting chats before we headed off to find the Coastal Path, Sennen Cove to Lamorna – 12 miles.  Made sure we had fully engaged with the correct path at the start today.

An easy start with some grassy paths and wide gravel paths – in fact quite a smooth exercise right up to Lands End, arriving early enough to beat the crowds. 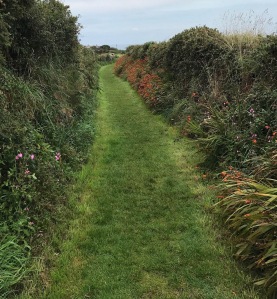 Shortly after that, the path started to get a bit more bumpy and several times both Steve and I took a tumble – the minute you take your eyes away from the ground it seems to result in a trip, it’s so annoying.  At one point a young guy came athletically strolling towards us with his sheepdog on a lead – just before he reached us he did the old flying ‘trip’ – so tempting to say that childish ‘enjoy your trip?’ – but I know I would have punched someone if they had said it to me earlier!!   And the terrain got worse and worse and the day of trips continued.  We were on one of the many descents, Steve striding ahead, when he caught his foot on a tree root and literally flew – he had looked up momentarily as a family were approaching and ‘the trip’ was in full motion – his hat and glasses went flying!!  How he recovered himself I don’t know, he managed to stay upright – quite a shake up though.

Late morning we stopped for a delicious cream tea, although overrun with wasps.  Turned out to be a sensible decision as it boosted the energy levels to get us through the next 4 hours of hellish walking.

It was from about this point that the constant ascents and descents started and they were tough … and it was getting hotter and hotter.  At one point Steve spotted some walkers ahead and commented that they must have taken the wrong path as they were walking so close to the cliff edge – “there’s no way I’ll be doing that” he said!!  But oh yes, you’ve got it, 10 minutes later we were on that path.  I’ll called on all my angels to sit on our shoulders during this day.  Just past the Minnack theatre we had to walk down the steepest of boulder steps – well I had to do some of it on my bottom – I can’t describe how steep and scary it was.  And the day went on and on like this – the last mile or so was cliffside bolders – there was no let up.  We reached Lamorna after 7 hours of walking – so relieved to eventually find our gorgeous airbnb for the night.

The only thing that kept me going through the day (because I felt on many occasions that I couldn’t go on) was telling myself that I would never do this again.

Headed out for a meal at the local pub – Lamorna Wink – lots of wine to aid the recovery and a giggly walk home in the dark.