Well today I cried for the first time, full on tears (and I’m not ashamed) – this was heart-thumping fear!

Today’s 9 mile walk from Pendeen to Sennen Cove promised to be a moderate one, so after a delicious breakfast with our host Mary we set off full of purpose and joie de vivre!   Sadly on two occasions we made the wrong decisions and ended up off track, in unchartered territory.  Now we’ve been through some testing situations thus far but finding ourselves walking long stretches up to our necks in overgrown ferns, brambles and all things prickly, not being able to see anything underfoot, shortly followed by narrow paths at the cliff edges with wind blowing from all angles – I’m afraid it was all too much for me.  Poor Steve had to guide a quivering wreck by the hand as we inched our way along, finally having to scramble up the side of the cliff on all fours where we were reunited with the coastal path.

After the initial disasters, the majority of the day turned out to be manageable and stunningly beatiful – really hot too.

The heathers are a stunning spectacle – vivid yellows, orange, pink and purple 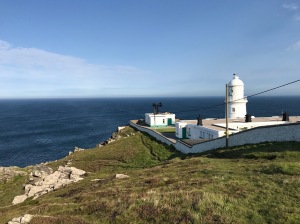 And all continued well to near the end when we had a final beach to manoeuvre across – we thought we were so clever in taking off our boots and paddling so that we could avoid clambering over the rocks.  Unfortunately the tide came in a bit too quickly – once we were up to our bottoms in water we had to rethink our plan, resulting in having to tackle the rocks barefoot.

Anyway, we finally reached our destination for the night and all was well.  Lovely people, a room with a view, stunning garden to enjoy our sundowner, washing and drying facilities and the house to ourselves for the evening.

This little project of ours takes some twists and turns and emotions fly up and down.  I’ve likened it to finding yourself in childbirth for the second time – once you sleep on it you forget the pains and go back for more!!  So tears all dried up now – we’re off to Lamorna in the morn! 😊