To be perfectly honest this was not a good day!!

Started off keen with an early rise & breakfast, so we could get to the cricket in plenty of time.  Luckily we got into conversation with another hotel guest who pointed out it was a day and night game, starting at 2.30pm!   Not quite that keen.  So had a leisurely morning and big catch-up blog time.

When it came time to go all the Ubers seemed to be stuck in traffic – the city grinds to a standstill early afternoon as the schools chuck out.   Our hotel chappie sourced us a car from elsewhere and so off we set, not quite as early as planned but we were on our way!  As we inched our way through chaos there was a sudden bang … a tuk tuk had driven in to the back of our car.  The two drivers proceeded to rant and rave leaving us deserted in the middle of about 4 lanes of heavy traffic … and time was getting on!   Eventually they decided to pull over to continue their ‘discussion.’  So we took the opportunity to get out, pay up and flag down a tuk tuk in desperation!  We got to the stadium just as the first ball was bowled.  Phew!

We met up with Richard, Judy and family … the sun was shining and there was some good cricket – the Sri Lankans batted well.  During the day we enjoyed a few beers together, ate a bit of chicken and rice (as you do!) and all was well. 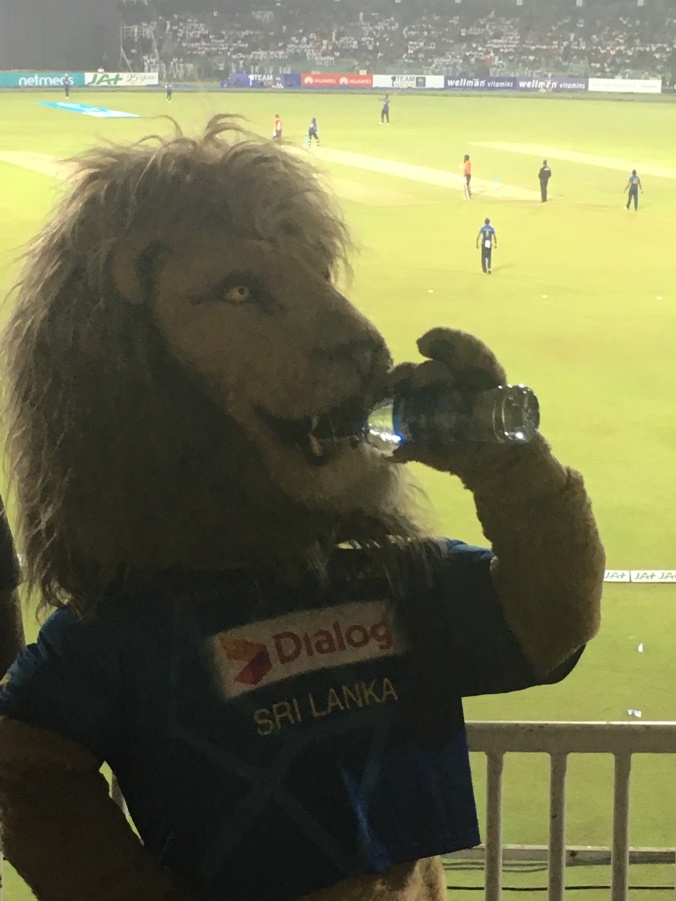 We marvelled at the pelicans flying overhead and as it got towards dusk the bats arrived … some extremely large ones too!  England came into bat and there were some early wickets … we tried to keep the faith but our batsmen were dropping like flies.

The rain clouds sweeping in

And then came the rain.  And extremely ferocious thunder and lightening.   So the end of play was announced and Sri Lanka had won the day – they genuinely deserved it.  We however now had the problem of getting home in this most torrential of rain.

Thousands of bodies were leaving the stadium en masse – the local roads and transport systems just weren’t up to this volume of traffic.  We had to wade though deep puddles of muddy water along the edge of what felt like the M25 … we walked and walked in darkness, in the pouring rain, until we found what we thought might be a suitable place to book an Uber – no such luck – the main roads were gridlocked too.  So we walked on, not really even sure of the direction to our hotel.  Eventually, again in desperation, we took a tuk tuk.  And boy did we regret that – he drove like a bat out of hell, taking us in a large loop around the city, down lots of bumpy passages and side roads, and half an hour later passing where he had picked us up from.  I was pretty much traumatised – and after an incredibly near miss when he drove through red traffic lights, Steve demanded he stopped (+ a few other words)!  … and we got out and walked the rest of the way.   It really was two hours of hell – we got back to the hotel drenched and fed up – that is definitely the last tuk tuk we will use in Colombo!

We slept off all the stress of the previous day – today just had to be better.  We set off to find the beach area of Mount Lavinia – nothing like sea, sand and sunshine to make the world feel better.  And that’s just what we found on Sugar Beach.  Rocked up at a seafood restaurant that allowed us to use their sun loungers as long as we bought refreshments.  It was a simple place but food and hospitality was superb.  Our first sea swim of the holiday – fabulous, we had a perfect day. 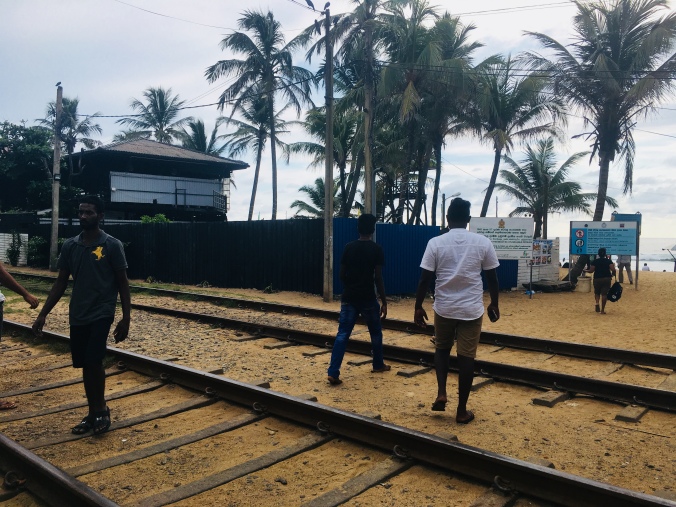 Loved the quirky fact that you had to walk over the train line to get on to the beach! 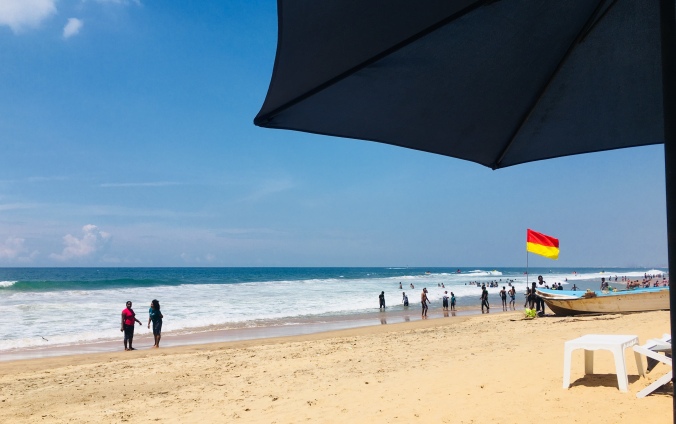 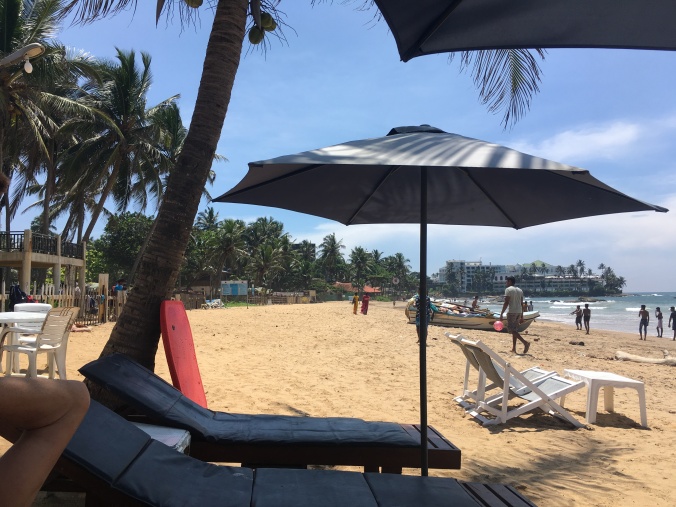 Today was a Poya Day which is a monthly full-moon inspired National Holiday for the Sri Lankans.  So the beach was full of local families and groups of youngsters enjoying themselves – it was lovely to watch them laughing in the waves and playing cricket on the shore.

We got back to the hotel just in time to avoid another heavy downpour.  We were determined to make up for our misery of last night, so got all dressed up and called a taxi to take us to a restaurant called Barnesbury’s that Steve had found online.  It was a stylish restaurant with a grand looking bar area – this was more like it!   My mouth watered as I settled in for my pre-dinner G&T … but it turned out they didn’t sell alcohol.  The waiter smugly informed us that we wouldn’t get alcohol anywhere tonight anyway, as it’s a Poya Day.    The food however was superb … as were the mocktails.

When we got back to Ellen’s Place, our bijou hotel, the lovely waiters allowed us some beer.  They informed us earlier in the week that they’re not allowed an alcohol licence as they are near a school – they can sell their local Lion Beer however as it’s only 4.4%!!

So city versus beach … it’s beach for us everytime.

One thought on “Bats and beaches … from city to seaside”