The drive from Kandy to Colombo was an estimated 4 hours, but we agreed to make a couple of stops on the way.  The first stop was to the Millennium Elephant Foundation Orphanage which is dedicated to improving the welfare of captive elephants in Sri Lanka.  As well as being able to be up close to the elephants, you are provided with clear information to the Foundation’s objective in rescuing working elephants from the logging industry and the howdah tourist industry.  We enjoyed our short time there, sitting with the elephants and watching them being walked and bathed.  Bare-back riding is still permitted but they are trying to replace this with ‘walking with elephant experiences’ instead. 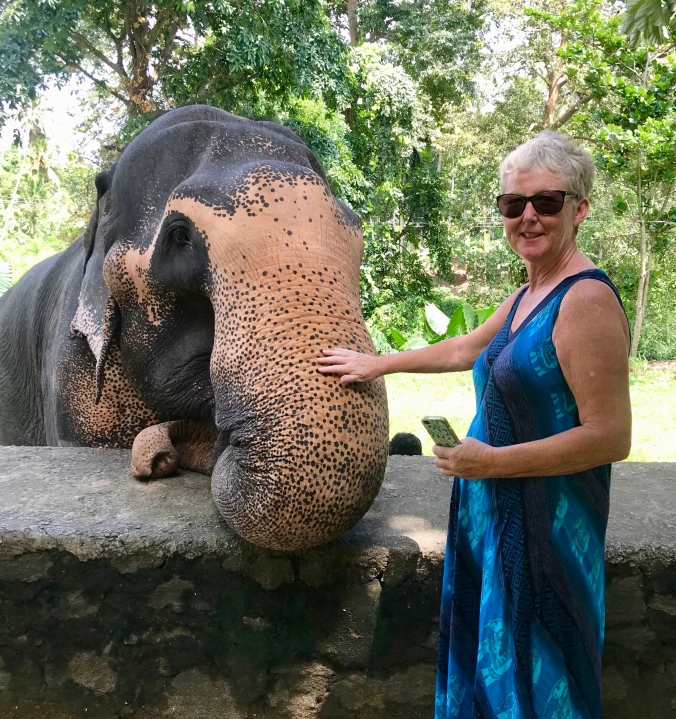 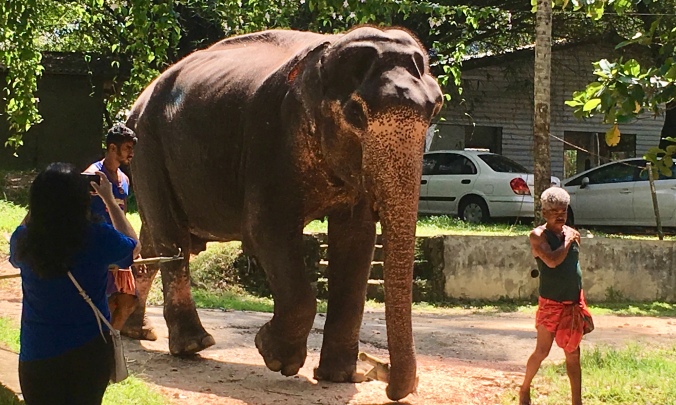 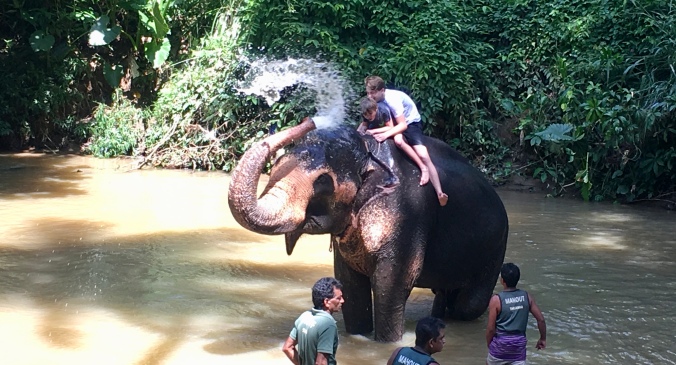 We drove on through places such as Mawanella and Ambepussa – the traffic was busy but the roads of a good standard.  It was tree-lined pretty much all the way – coconut palms and jack fruit trees as well as other luscious vegetation and paddy fields – this country is SO green.  It was so interesting to find that at each settlement area they had their own area of expertise which was clearly evident in their roadside stalls – clay pots, leather, blow-up beach toys, cane/baskets, cashew nuts, spices and car-seats.

We stopped to have a light lunch in Ambepusso and then headed on through Nettanbuwa and eventually into the busy city of Colombo.  Sheik found our little 3* hotel tucked away behind some building works and so we settled into our new home for the next 7 days.  Fond farewells to Sheik who has been an amazing driver for us in Kandy – would thoroughly recommend him.

Our new hotel is called ‘Ellen’s place,’ named after a former Prime Minister’s wife.  It’s small and friendly – just how we like it.  Having since discovered the delights of Galle Face however, we sort of wish we’d splashed out on some 5* living – but hey ho, we’re pensioners!  We ventured out for a walk in the evening, finding ourselves a beautiful Italian restaurant to eat in (still avoiding spice) … and it was fabulous.

Had a bit of a lay in, followed by a delicious breakfast with real bacon!!  Then we called our first Sri Lankan Uber!  It’s so much cheaper and hassle-free.  Had a lovely driver called Alex who spoke perfect English and knew everything there is to know about cricket.  We stopped off first to collect our cricket tickets – then another Uber to the train station to check out options for travelling to Hikkaduwa next week.  The sweet information man ensured us that the best option was to take a driver as taking our luggage onto a packed train would not be advisable – I was relieved … but Steve’s dream was shattered.  Next time I think we’ll be bringing rucksacks!

Then we walked … and we walked … in the baking heat, thinking we were heading to the seafront.  Turned out we were walking in the wrong direction.  Resorted to taking up the offer of a passing tuk tuk – in our haste, forgetting all the warnings to make sure it was a metered tuk tuk.  And so the crazy ride to Galle Face began … and just as we arrived at Galle Face we were flagged down by an angry policeman – the driver was told off big time and the policeman told us he was a dangerous driver “crazy in the head!”  To be honest we’ve had worst but at least it got us out of continuing the journey!

We had a lovely stroll along the promenade – great to be back on the coast again.  Stopped off at the plush 5* hotel – The Raj – for a juice and to envy how the other half live!  We sat at the poolside cafe area and looked longingly at the amazing swimming pool and loungers – being used by one resident only.  We checked but it was definitely for residents only – so mean.

We returned to our hotel and had a little splash in the small plunge pool and jacuzzi – still refreshing after our hot walkabout.

Then at 5.00pm we went to meet Richard and Judy at their most amazing 5* hotel – The Galle Face Hotel, oh it’s beautiful.  They had invited us to join them for sundowner drinks at the Pool Bar.  We also got to meet their 3 fabulous children – Aaron, Scott and Kathleen.  There was a large party of Naval Officers all dressed up handsomely in their whites, real ‘Officer and Gentleman’ stuff – just missing Richard Gere!  We had a couple of beers as we watched the sun go down (a little cloudy unfortunately).  At ‘the going down’ a set of pipers arrived on the scene and marched to the flag on the sea-wall, where it was lowered and removed – quite a spectacle.  We were also entertained by one of the hotel staff, dressed in colonial garb, whose job it was to use a catapult to shoo away persistent crows – hilarious! 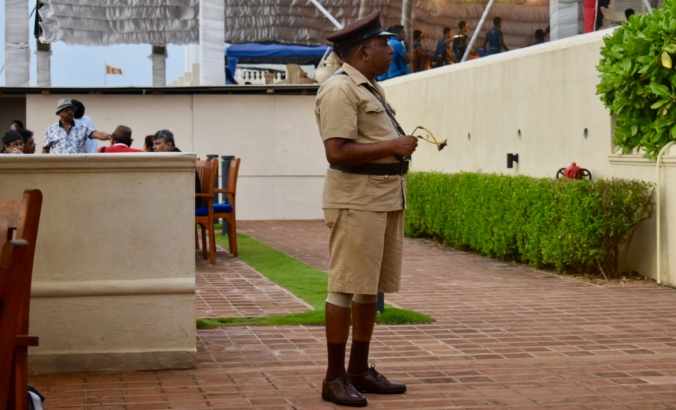 Man with catapult … watch out crows!

The pipers of Galle Face Hotel 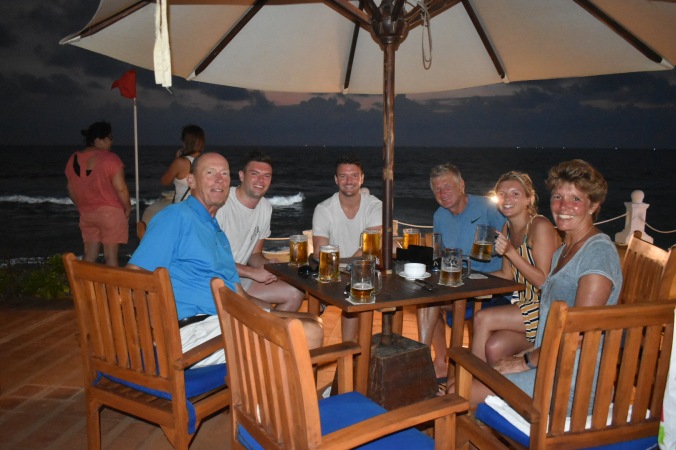 After drinks, we joined the lovely Benmore family in a walk to the Cinnamon Hotel (yet another 5* establishment) where we dined in the Lagoon seafood restaurant.  Scott and Kathleen skilfully sorted out a selection of starters and main meals – choosing fish and seafood from the amazing fresh display in the centre.  We had such a fun evening – I tried octopus for the first time and loved it – the food and sauces were incredible … and some perfectly chilled white wine too.  We got back to our hotel at 10.30pm – that’s late for us these days!  A great evening, great company, great food, great wine – now hopefully a great sleep.

But what followed was a heavy night of rain and thunder!

2 thoughts on “From elephant orphanages to 5* hotels”