We took full advantage of this morning’s sunshine to swim and enjoy some poolside lounging.  Then late morning we headed off to explore the local delights of Dambulla.  There’s nothing fancy about this town – you just get a feel for the true Sri Lankan way of life.  We had a good mooch around the local shops, selling just about everything – washing machines, brightly coloured and patterned clothes, toys and homeware, endless flip flop shops +  fruit and vegetable stalls galore.

We stopped off for some lunch at Mango Mango … and for the equivalent of £4.00 ate like kings!  Food is amazing but service leaves a lot to be desired.

Walked back to the hotel in the now baking heat – stopped off at the local market for a nosey –  even more fruit and vegetables plus a whole selection of interesting items, including goldfish in plastic bags!  I’ve not seen this since my teenage outings to Portland Fair!

And today was all about the BIG climb.  We’d been here for 5 days and couldn’t put it off any longer – I’d been using my cold as an excuse but now the excuses had run out.  So at 8.00am we set off in the hotel bus to Sigiriya Rock – also known as Lion Rock … and said to be the 8th Wonder of the World.  This rocky outcrop has near vertical walls and a flat-topped summit – it contains the ruins of an ancient stronghold.  So it was a piece of history not to be  missed.

It was baking hot even at 9.00am when we started to walk up … and boy those 1200 steps are definitely a challenge.  I kept being approached by ‘helpers’ but I kept saying “I’m OK” and they would leave me alone.

The rock steps are narrow so you have to constantly watch your footing and try not to look back down.  Nearer the top the steps turn into metal stairs but with rails they were more manageable, except for being able to see the drop more clearly.  We both put our brave heads on though and kept going … to the very top.  Unfortunately just short of the top I started to struggle badly with the heat and had to sit down with dizziness – Steve had to keep going because of his fear of heights.  And so it was that a ‘helper’ came to my rescue and, after I’d revived myself with some water, he took my hand and guided me up the last flight of stairs.   At this point he refused a tip saying he officially worked here … and we thought “how kind.”  Then he insisted on escorting me around the ruins of the King’s palace on the summit, not letting go of my hand, taking our photos, giving us a guide to the area etc. – and we still thought “how kind.”  But very soon he started to tell us about the family he had to support and practically dived into Steve’s wallet – insisting that R5,000 was the going rate! 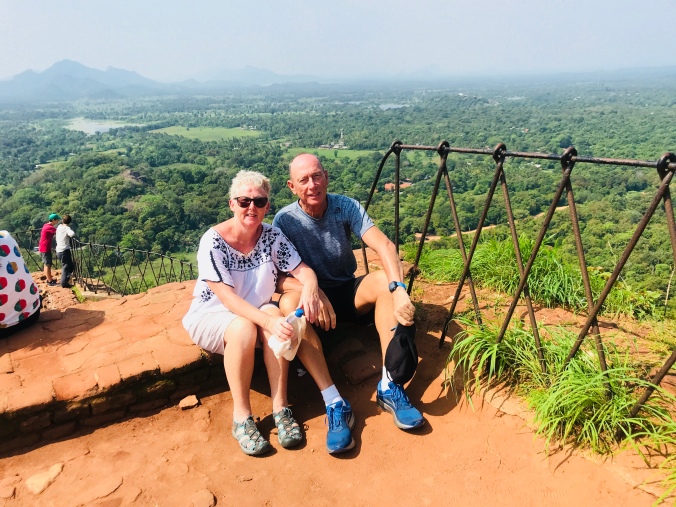 It was a fairly hairy walk down too.  On the way up they advised you not to look down, but when you were going down there was no choice!  To celebrate being back at ground level we treated ourselves to an ice-cream and attempted to sit on a bench to recover our shaky legs … only to be pestered by monkeys … well, makes a change from seagulls I guess!