The day started so well. We didn’t need to leave for the airport until 11.00am so plenty of time for a relaxing morning. Steve had an early run and we were in the pool by 7.00am. Oh so chilled!! Leisurely breakfast at the poolside and even a little sit in the sun, before getting ready for the off. Our transfer vehicle arrived promptly and we got to the airport in record time – what could possibly go wrong!?

Doubts started to set in as our flight details were not matching the information board – at our age we have to check and double-check every move we make …. did we have the right day? …. did we have the right airline? Our flight number was showing a later time with no mention of delay, confusing! In the process of investigating this at the enquiry desk, we managed to jump a massive queue to get checked in … yes, the flight had been delayed by just over an hour. So this now left us just an hour and a half transit time at Kuala Lumpur – no worries.

So we had a fair old time to kill in Bali airport, but we ate and shopped and read …. and time drifted by. We were flying Air Asia, the flight going on to Mumbai after our transit stop … it was a large aircraft and therefore swarms of excited passengers hanging around the departure gate. It’s probably us getting old but group foreign language conversations seem so loud and shouty, sometimes aggressive. And loads of children – what joy!!

The revised departure time came and went …. we finally boarded another half an hour later (eating into our transit time!) … but getting everyone settled was another matter. We just couldn’t believe how hard the stewardesses had to work to get people to sit down, it was chaos. This resulted in losing our take-off slot and so we then had to sit for another half an hour before take-off – our stress levels were building. Our transit time now was impossibly short – we were mentally preparing ourselves for a missed connection and a night at Kuala Lumpur airport.

On top of all that, it was the worst flight for turbulence I’d ever experienced … seat belts practically all the way, limited food and drink service as the cabin crew had to remain seated a lot of the time. This still didn’t stop some customers standing up, using the toilets etc. – they just completely ignored instructions. When we did get some drinks service, I asked for a white wine but they said they only had red – then when they checked they had no red – asked for beer at which point they remembered that as we were sat by the emergency exit (extra leg room that we had paid for) we weren’t allowed to have alcohol due to the responsibility that involved!! By now my nerves were big time jangling!!

Anyway, we got to Kuala Lumpur with about half an hour to get through transit, naturally involving more security and passport check, but we decided to give it a go. This involved a good deal of running … our departure gate could not have been any further away, it was the very last gate. We arrived with only minutes to spare!! Another ‘dry’ flight and some turbulence but an improvement on the previous flight. So relieved to touch down in Colombo.

And there we met up with our taxi driver for the 2 hour journey to our hotel in Hikkaduwa. It was 11.00pm by this time so very dark yet the city roads still hectic. There was a Buddhist festival parade in full swing which probably added to the traffic and meant diversions for us. Our driver kept having to stop to ask for directions! But it was when we hit the freeway that the problems set in … the car seemed to be drifting all over the place, we were straddling both lanes most of the time – then Steve noticed that the driver was struggling to stay awake. At one point Steve had to shout out ‘stop’ when the sleepy driver hadn’t noticed that the vehicles had come to a stop in front of him. From then it was like Steve was driving from the back of the car, watching out for vehicles in front and behind, having to mention to the driver when cars were about to overtake him. The driver busily unwrapped sweets and drank from his water bottle, fiddled with the radio, opened his window – all in the attempt to stay awake!! When we got off the main roads at least there was less traffic but we were hurtling down tiny country lanes in the pitch black … with huge relief we pulled up at Vesma Villas about 1.00am in one piece.

We were met by two lovely members of staff, with what seemed limited English, and shown to our room which was quite simple in comparison to what we had just left. So, we were so tired and wound up from the trip – we seemed to have landed in the middle of nowhere, the room was basic, no kettle or tea-making facilities, it was so dark we couldn’t really appreciate the rest of the hotel area …. and there was no mini-bar … in fact the hotel does not serve alcohol … it really hadn’t been a good day! ☹️

BUT, all seemed different in daylight. In fact we are staying in the most beautiful of places – in the middle of a luscious rainforest, with paddy fields surrounding us, coconuts palms towering over our villas – it’s stunning. The room is in fact perfect – everything we need (so funny how things look different when you’re tired!!), fabulous swimming pool, good food and the most friendly and accommodating staff. So quiet and peaceful too – the only noise is birdsong. Just a 10-15 minute walk (or tuk tuk ride if preferred) is the beach and the busier areas of the town, plenty of beach bars, restaurants and shops. We absolutely love it … and it will make a truly magical last stop on our ‘gap year’ trip. We’re also lucky enough to be spending some time over the next few days with Anne, Nathan and some of their friends, who just happen to be spending Easter here. So, more stories to come. 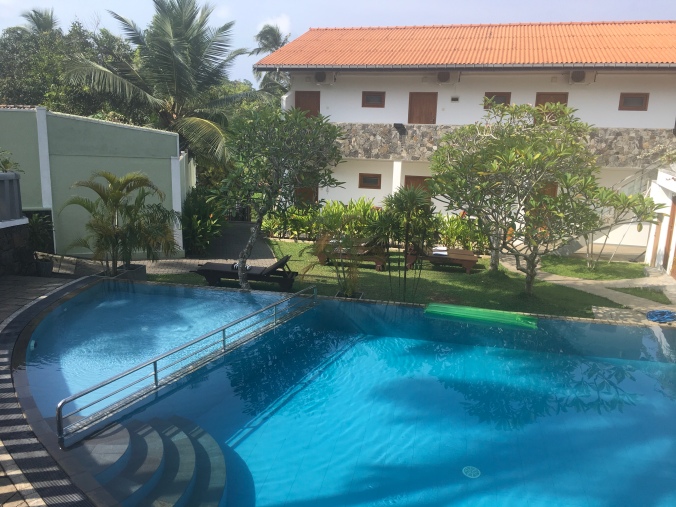 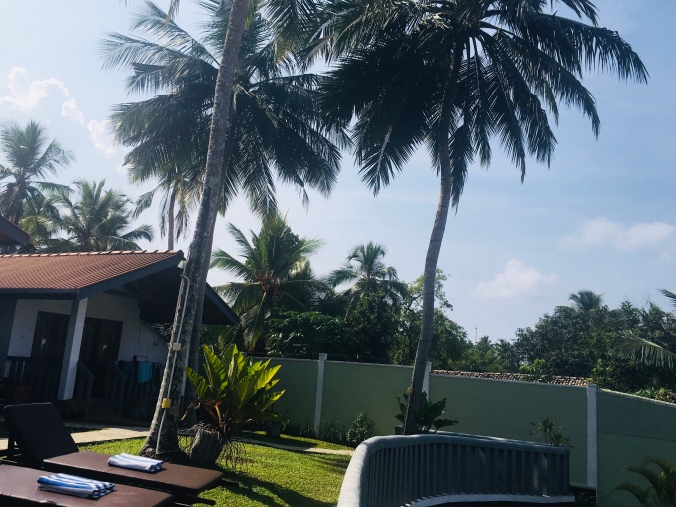 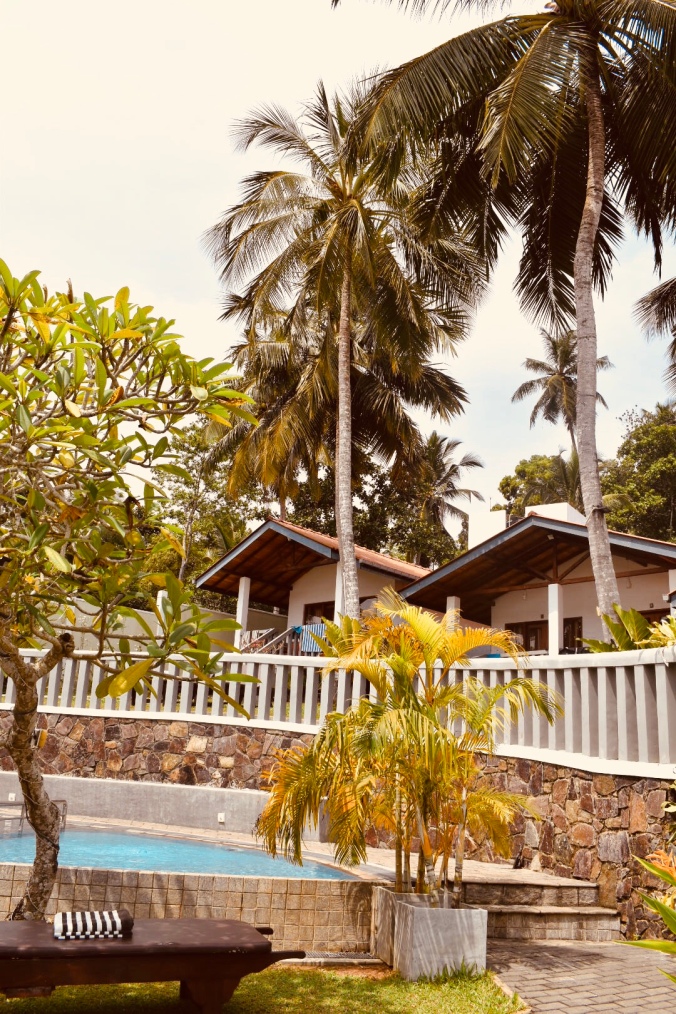 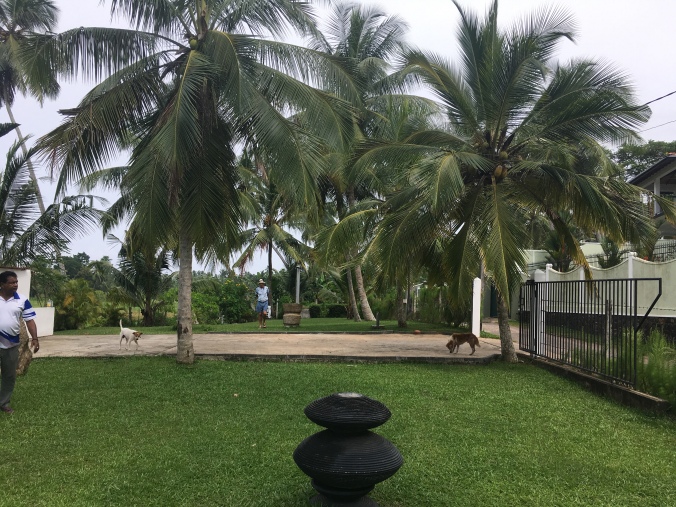