On 29th December we took a Qantas flight from Melbourne to Sydney … all good apart from the turbulence at different parts of the journey, but particularly on landing!! It was the ‘no hot drinks served for health and safety reasons’ stuff – so we arrived white-knuckled but happy and excited to be back in Sydney. We had arranged to meet up with Kaye, Greg, Mark and Shirley at the airport – they were flying Jetstar but were arriving at a similar time and staying in a similar area so we had pre-booked a large maxi-taxi to accommodate the nine passengers plus luggage. We arrived first and found our friendly driver, our Aussie friends however were almost an hour late … Tom kept the driver engaged in ‘happy banter’ while Steve went off in search … and unbelievably the driver remained absolutely cool – just couldn’t imagine that back home!!

We (the 5 poms!) arrived at our accommodation in Bondi Road, a huge tower block – luckily we were only on the first floor. Inside it was decorated to a very high spec – the shared areas left a little more to be desired, including the lift!! We were met by our host, Anna, a stunningly beautiful blonde Russian girl, with the shortest skirt and the highest heels I have ever seen! The tour included a trip up in a rickety lift to the 11th floor where there was a swimming pool – incredible views over the whole city – bit of a party atmosphere around the pool (not quite our scene). As with all accommodation, there were pluses and minuses – huge comfortable beds and kitchen drawers full of complimentary items such as teas, coffee, hot chocolates, biscuits, chocolate bars, crisps, sweets, cereals, spreads … on the minus side there were no wardrobes! – just a wooden ladder in each bedroom with a few wooden hangers! We were aware that there was only one bathroom but the website had indicated use of two extra toilets – well … they must have been up by the rooftop swimming pool because they certainly were nowhere near our apartment. But we managed, of course we did … some strict shower rotas especially on New Year’s Eve.

It was a fabulous location, a 15 minute walk to Bondi Beach – backpacker’s paradise. Exceptionally busy beach and an area full of bars, cafes, restaurants, shops – over the 8 days we were there we grew to love it. Steve and I pretty much stood out though as we were probably a couple of generations older than anyone else!! We just go with it though – found ourselves a little spot on the sand on the first day – tried to switch off to the Sydney glamour set around us and to the fact that the beach is one big ‘pulling arena!’ Even braved the sea (despite Tom’s scary stories of shark attacks). The waves were incredibly strong and it was quite seaweedy so I didn’t go in far – Steve went further and managed to get himself into a little trouble – found himself suddenly out of his depth and struggling to beat the current to get himself back in. I was waving to him with OK signals but he wasn’t returning the OK. I was aware that the lifeguards were stood behind me talking about Steve, suddenly the one with the fancy bonnet said “I’m going in to get him.” I thought Steve’s gonna love that!! But in the next breath he said “Oh he’s standing now” … I was relieved it didn’t end in a full scale rescue!

And the first couple of evenings we spent in the Sydney Harbour Bridge area … because it’s such an amazing place to be – iconic sights and a great vibe. Steve and I met up with Kaye, Greg, Mark and Shirley there the first night – the younger members of the ‘team’ having gone off to explore Sydney for themselves. When Alice and Mark finally caught up with Tom, he had been wandering all over the city and had discovered many quarters, including 2 hours in the botanic gardens. They sampled some bars in the city area before stumbling upon a rooftop pool party which somehow they managed to get invited into – by this time they had had a fair few drinks so were totally uninhibited by the fact that the partygoers were Sydney’s glamour set and they just blended themselves in … including Tom taking a dip in the pool – a true first night of the holiday experience. Steve and I had a much more sensible first night as it was the Parkrun in the morning!!!

We returned the following evening to the same area because we so wanted Tom, Alice and Marc to see the bridge and the Opera House and of course they loved it. Took a ferry trip to Darling Harbour, had great views of a visiting Cruise Liner. 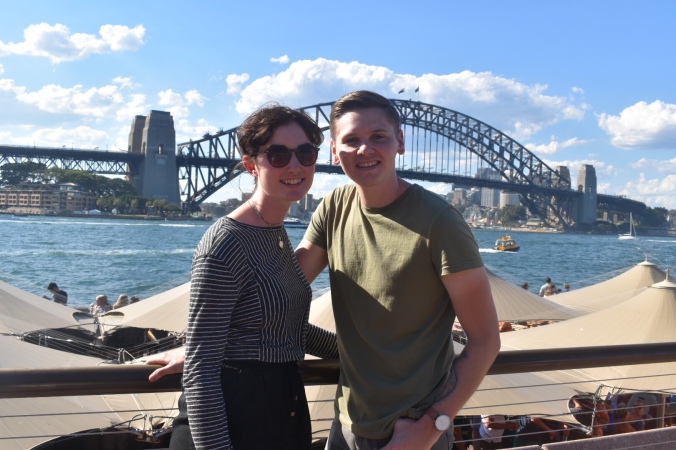 And this was only the start … we had lots of lovely days to come ….

Footnote: the lack of Tom in the photos is due to the fact that he constantly went wandering … as he does!!!!! 😉