For anyone that doesn’t know, the MCG is Melbourne Cricket Ground, locally know as ‘The G.’  It is the largest sporting venue in the world, holding 110,000 people. During the Ashes tour, Boxing Day at ‘The G’ is the place to be – it’s on so many bucket lists.  And Steve, being one of the world’s greatest cricket enthusiasts, had it high up on his list of things to do.  So, do it we did … and Tom, Alice and Marc joined us too.  Quite a feat getting all of us up at 7.00am on boxing day (no lie in or cold turkey and bubble and squeak for us that day!!) and off to the station to catch the 8.15am train to the ground.  Plenty of others had made an early start too – the queues had already formed. 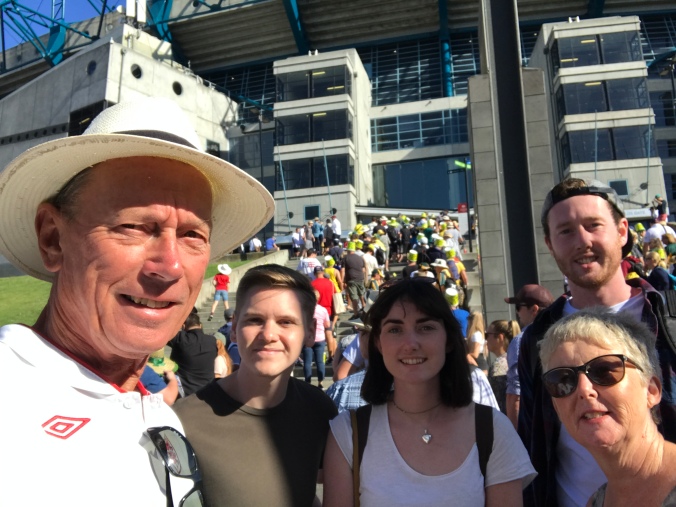 All very organised and civilised though – as soon as the doors opened we were quickly in – amongst all sorts of fancy-dressers, and Aussie supporters with their bucket heads, and found our seats.  Despite the current disastrous result (3 – 0 to Australia), today was a new day and we faced it with full enthusiasm.  The Barmy Army were in great voice from the off – nothing can dampen their true English spirit!!  Anxiously awaited the toss, hoping to win (for the 4th time I might add!) but sadly it went the Aussie’s way this time and they chose to bat.

Another major achievement was that Tom lasted until 11.00am until he had his first beer – a whole hour of resisting!!!!  Marc was the next to break … Steve, Alice and I resisted until at least 12.30pm!

Unfortunately not the most interesting of cricket that particular day – Australia batting and just two wickets (get me!! I’m learning all the jargon!!)  Moved down to hang out near the Barmy Army for a while – soaking up the atmosphere of the singing, the fancy dress attire and the Mexican waving.  It was an extremely hot day so plenty of refreshment was required.

We left the ground just before 6.00pm and our opponents were looking in pretty good shape – a tad short on runs possibly but despite some good fielding from England, far too many men left to bat.  But as always, tomorrow is another day ….