Arrived in Bangkok on Sunday evening, checked into our quirky hotel, right in the heart of the old city – it’s called The Old Capital Bike Inn (highly recommend it).  Love Bangkok, roads a little manic with pushbikes, motorbikes, mopeds (complete with families of four + all their shopping), cars, tuk tuks and buses whizzing around in all directions … but at least the traffic’s slow compared to Cairo and Dubai.  The walk from the plane through arrivals to the taxi took longer than the 40 minute journey to the hotel – I have never been to such a long terminal – it went on forever!! 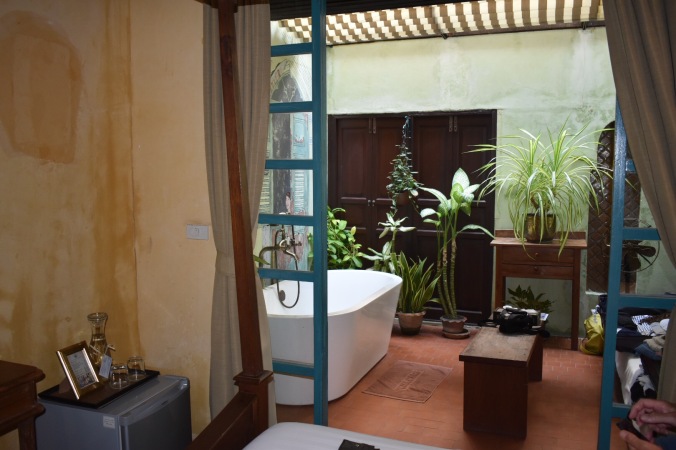 The Old Capital Bike Inn – our bedroom and bathroom

As we had only two days to explore bustling Bangkok, we hired a driver and guide to take us on our own tour of the city – money well spent – we whizzed around from place to place, so much quicker than if we’d been on one of the many coach tours.  Our guide, Wit, was informative and jovial – loved to laugh at his own jokes – and we gradually began to understand his Thai English by the end of the day!!  We were incredibly lucky to be able to visit the Grand Palace – it was open for the first time that day, having been closed following the death of the King of Thailand.  The city was adorned with large photos of the King in gilt frames, decked with local flowers – he was clearly a well loved King.  After the palace we visited a number of temples, each one with its own beauty, architectural style and Buddha types.  We saw an Emerald Buddha, an extremely large reclining Buddha, a Buddha made of gold, fat ones, thin ones, rows of golden painted buddhas, the odd black buddha, a Japanese Buddha, a Burmese buddha and an alarmingly thin (sticking out ribs) Greek Buddha – each one had a story of their own – absolutely fascinating.  We learnt so much from Wit about Buddhism – would like to study it more.  We finished off the trip with a visit to the Golden Mount – this involved a climb up 344 steps (nothing to us hardened Rambling Roses!) where we were able to enjoy a view over the whole city (and clang many bells and gongs).   The old city, with some of the original city wall still evident, has been protected from any high-rise development – the outskirts however are now becoming filled with skyscrapers, such a contrast. 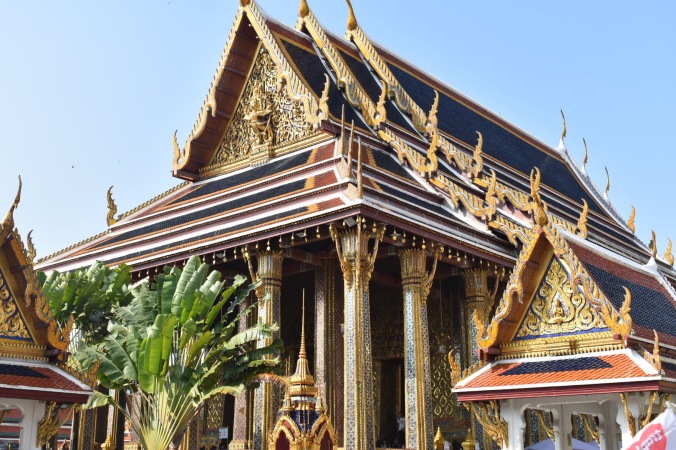 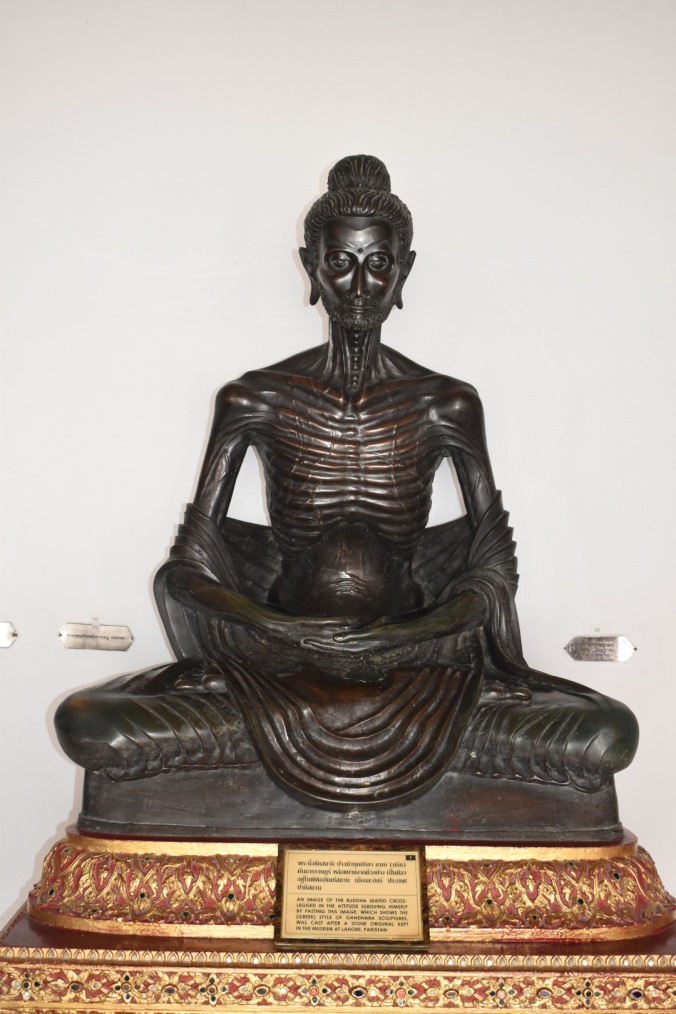 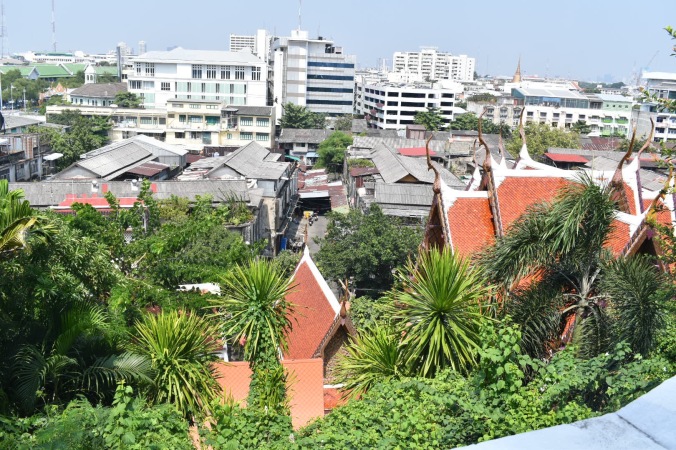 It was some relief to get back to the hotel to change into cooler clothes – our tour had specified long trousers, long sleeves and no sandals and it was a hot and humid day – sometimes between temples we couldn’t help but nod off in the car – the real old nodding head stuff!!

At the hotel manager’s suggestion we had dinner at a riverside restaurant – very smart with posh Thai cuisine – and a stunning view across the river to, guess what, a temple!!  Turned out to be a bit of a bizarre experience however – the only other diners were a table of ladyboys who were constantly preening themselves and posing for photos and selfies and then a young English lad who looked so out of his depth with a Thai girl who again spent the whole time pouting and posing for selfies, no conversation.  And whilst we were trying to tuck into our OH SO spicy food, there was a team of what we can only think were health and safety inspectors going round with torches, looking under the flower boxes and seat cushions – it was like something out of Fawlty Towers!!  There were so many party boats whizzing along the river too – Steve said it was like having dinner in a shipping lane!  Have decided to stick to street restaurants and beach cafes from now on.  Then how to to get back to the hotel – we of course had the inevitable tuk tuk price war – settled with Uber at an extortionate price of £1.05. 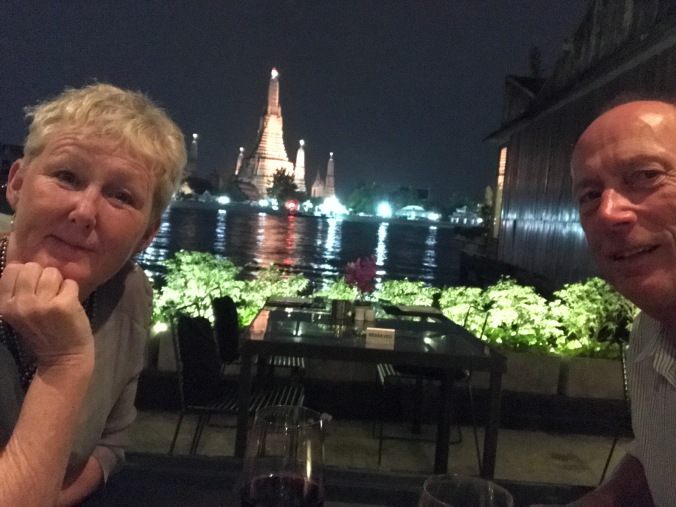 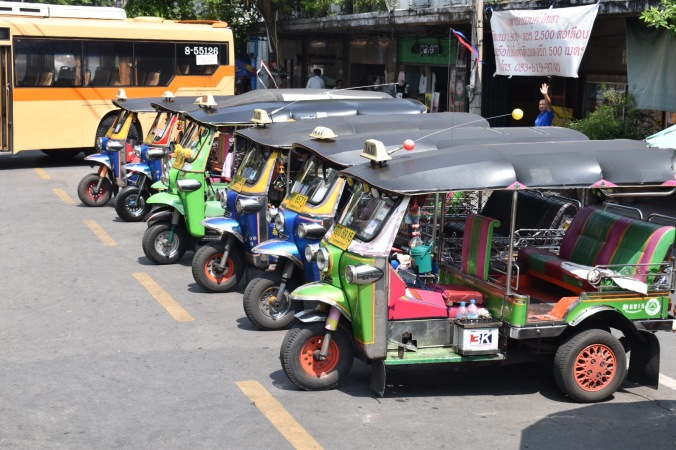 Never short of a Tuk Tuk in Bangkok

Tuesday we were a little more chilled – back to shorts and T-shirts as no temples planned for today.  Took the river ferry (once we’d discovered the longtail boats were not only much more expensive but very hard to get into – about a 4 foot drop from the pontoon into the narrow boat bobbing up and down on choppy water!) – a great way to see the city too. 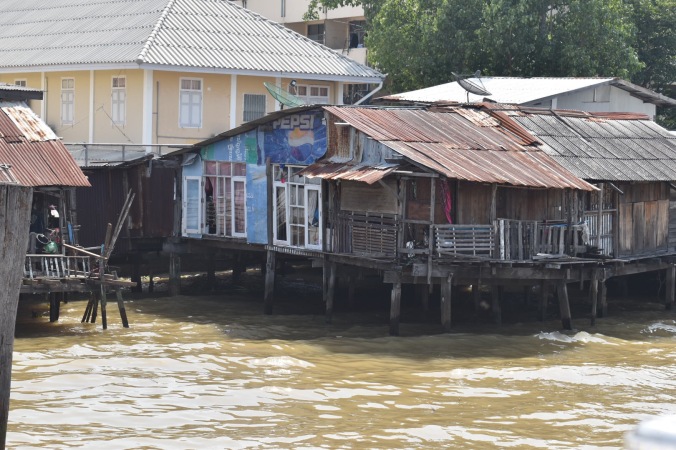 We then took the skytrain to the National Stadium which was the stop for The ‘Jim Thompson house.’  This took quite a lot of finding, google map stress, fallouts and asking direction from several locals – it was so tucked away but well worth finding.

Before going to eat, we went back on the river ferry to the Flower Market – absolutely stunning and well worth a visit if you’re ever in Bangkok.  What you can buy for less than a pound is mind blowing!

Steve joined a group of guests and the hotel manager on a bike ride around some of the more hidden areas of the city – they came across some Thai football being played, called Rattan.  I declined the offer and decided to luxuriate in a hot tub instead.

Our Bangkok visit would not have been complete without an evening stroll down the Khaosan Road so we headed off to find this famous backpackers’ strip of nightlife.  Quite an experience – loud, bright, colourful, fun – bars, restaurants, ping-pong shows, clothes and jewellery stalls, massage parlours, Thai girls, ladyboys – anything and everything.  We found a slightly quieter spot to stop for a beer – us old folks weren’t ready for this … and I don’t think we were target audience!

We’ve loved the sightseeing opportunities that Cairo, Dubai and Bangkok have provided us with and we leave these city stops knowing so much more about each place.  But we are also looking forward to the slow pace of life we’ll experience in our tucked away resort in Phuket … 4 weeks of relaxation.  And we’ll be joined by Alice and Marc (who flew to Delhi today) in 2 week’s time – so excited – will keep you posted ….