This is Kevin, our hotel dog. He’s really friendly and loves to wag his tail … he’s a bit like Harry Enfield’s teenager character Kevin – skulking around the place and moving from one shaded area to another to sleep. Not sure if that’s how they spell his name but that’s definitely what it sounds like!

Not so much happening today … spent the day at the hotel – caught up on blogging. A cloudy day with the most incredible thunder and lightening storm in the afternoon. Love it when these little visitors come to say hello though.

Did manage to drag ourselves out for an early dinner at Chill Space – and an early night.

Decided to set out on a local walk this morning … first thing it was a little cooler than usual …. that quickly changed though! We turned a different way to our usual walk and discovered lots more villages, all with friendly faces coming out to say hello and ask us where we were going. I’m not sure they understand the concept of ‘going for a walk’ – must be an English thing! So lovely to see real life happening – the ladies in their pretty colourful dresses and flip flops, young boys wobbling around on bikes they will grow into, old men with weathered faces and sunken eyes balancing gracefully on their rusty bikes, oh so many shopkeepers waiting patiently for customers … all seemingly selling the same goods – bananas, coconuts, chillies, crisps, biscuits, fizzy drinks and colourful brooms!

They are beginning to prepare for their New Year celebrations here in Sri Lanka, today is the children’s last day of school before a 3 week holiday. We passed some celebrations going on in a school field. 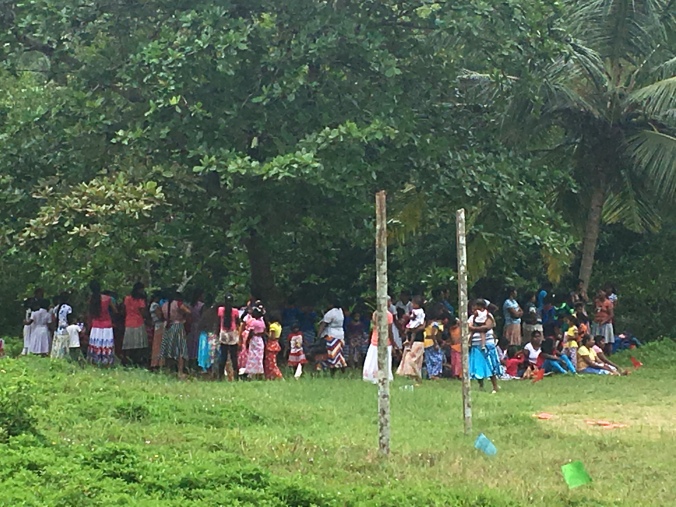 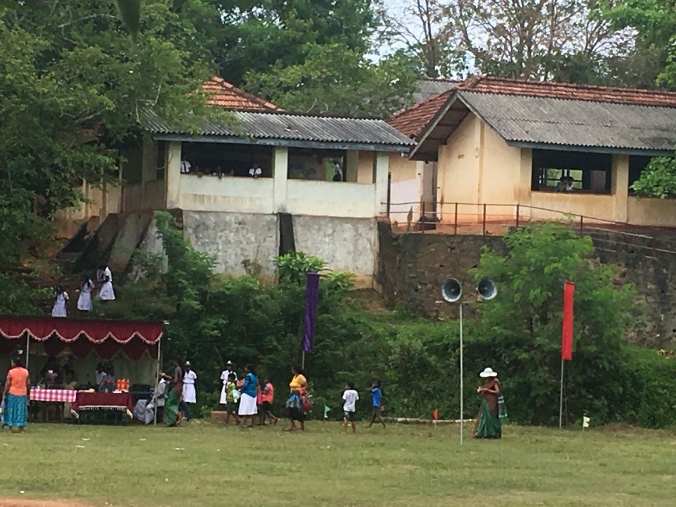 We made our way to the beach area and down to where the major fishing activity takes place … and to the fish market area (by this time of day it was all clear and scrubbed clean – still smelt fishy though). A few fisherman mending their nets but not a lot of life other than that. Well, there was one old boy who tried to paddle across where the lagoon enters the sea, delicately holding up his sarong … only to lose his footing and end up entirely submerged! We had to suppress our giggles!

We walked for about 5 miles in all …. not bad in this heat … always the best way to discover the local community.

On some recommendations, we decided to eat out at ‘The Asian Jewel’ – often referred to as the English restaurant as owned by Mr. Dale who is English. Our favourite tuk tuk driver came to transport us there – it was a fair old drive, completely off the beaten track, up and down hills and bumpy lanes – but it was a fabulous restaurant/hotel, the waiters were charming and the food first class. I’m ashamed to admit that I had shepherd’s pie – I was so excited when I saw it on the menu … and it was every bit as delicious as I had hoped it would be – gravy and everything.

Went out on another ‘long’ tuk tuk trip today – up into the rainforest area, predominantly to see the Andahelenadola Falls. Once again the journey took twice as long as we imagined – through a number of towns and villages, dodging in and out of scooters, trucks and buses as we went – always an adventure! Roisin was driving us so we knew we were in good hands … and he stopped to buy bananas on the way for feeding the monkeys. We feel our hotel in is a rainforest area but by comparison the green lush appearance of this area is on another level. On the way we passed tea plantations, rubber plantations and cinnamon forests. This falls is not yet on the main tourism trail so the simplicity of it made it all the more magical.

Once parked up, Roisin escorted us on the walk through the rainforest – started off on some fairly rugged lanes with a few boulders and then it got much more climby! We traipsed along steep paths of exposed tree roots, waded through shallow rivers – I had to be yanked up occasionally – I was being pretty brave at this point. Eventually we got to the waterfall and it was stunning, the water so clear and fresh. 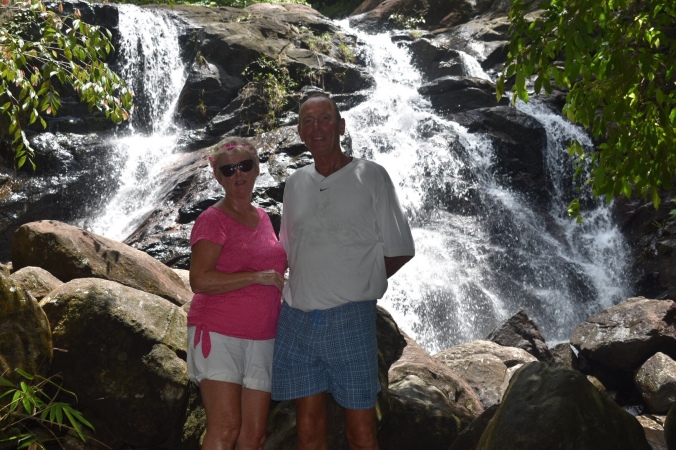 But it didn’t end there, Roisin suggested we climb up to the top of the waterfall and cross over it as there was a fresh pool for swimming at the top. So, with some coaxing for me, off we set. It was like being back on the South West Coastal Path all over again – climbing up huge rocks, some slippery, not being able to look at the drop below, realising I have a terrible sense of balance. But we did it, and it was great to see the ‘watering hole’ at the top being used by local families – swimming, jumping, splashing … and they were happy for us to look on. 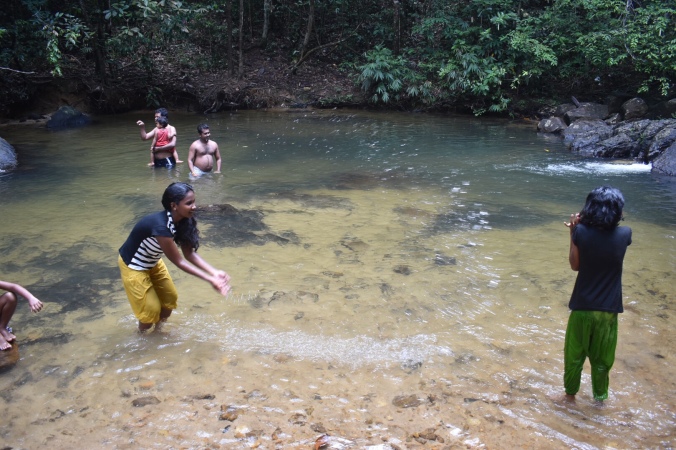 We’d been joined by monkeys on the way up too … and they loved the bananas! 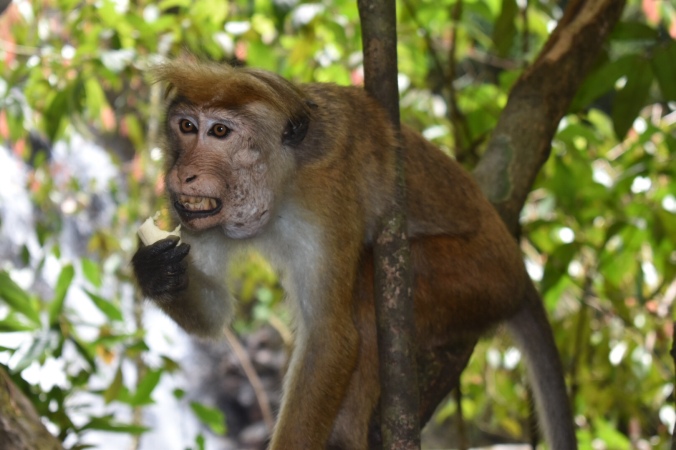 So, now it was all about getting down … this is the bit I really dreaded! With two strong men to guide me, I inched my way along, resorting to sitting on my bottom from time to time … helps with the height thing. By the time we got to the base of the waterfall the worst of it was over. Just a little bit more climbing down in places and a couple of rivers to cross. And of course, on the very last rock on the very last river, what did I do? Yes, it was slippery and I fell off onto my bottom in the water, grazing my leg in the process … not to mention wounding my pride! Well, it gave us all a good laugh 😂

We got back to where the tuk tuk was parked and ordered some orange juice from the sole cafe in the area. We absolutely love the orange juice they serve in our hotel – pure orange … but as for this one, well, the only resemblance to orange was the colour …. it was a watery and salty substance, so hard to drink enough of it not to feel rude. They also provided us with some snacks – vegetable samosas and pancakes filled with honey and coconut – now they WERE delicious.

After our little spot of lunch we hit the road …. and as we were leaving the rainforest, guess what, it rained!! Not only did it rain, it poured and then poured some more … all with a thunder and lightning storm …. and this lasted ALL the way home. At times poor Roisin was struggling to see out of the windscreen, with its one wiper and a misting up problem … and then we drove through a massive puddle and it was like we were underwater. I freaked!! I kept ‘suggesting’ we stop for a while but I was outvoted – so I just had to resort to keeping my eyes closed and holding on for grim death. So relieved to get home.

Finished off the day with a home-cooked curry by our chef, Monty – Sri Lankan chicken curry, Dahl, vegetable curry, rice and poppadoms – all washed down with some chilled Sav Blanc – perfect. With the lovely Azi keeping us company – he loves a chat.

Only a couple more days of our amazing trip left …. where did that time go!? 🤔