So today’s not only April Fool’s Day but Easter Sunday as well. I don’t recall that combination before but I guess it happens from time to time.

We had all planned to meet up for a late breakfast/early lunch at the Citrus Hotel – Steve and I, Anne, Caroline, Linda and the boys. Anne and Nathan were a little later joining us as Nathan had been late snoozing and then had a pre-breakfast feast of Easter eggs!! And bless her, Anne arrived with Easter pressies all round – lovely goodie bags of chocolates – such a treat. Steve’s pressie was a fabulous M&S bar of chocolate in a Union Jack wrapper – this was devoured pretty quickly … he was very good at sharing though!! As we were going to spend a couple of hours on the beach after we had eaten, we asked the waiters if we could store our chocolate in their fridge. They were more than willing to do so. So willing that in fact when we retrieved them some hours later, half of our treats were missing …. either some of the waiters were a little light-fingered or they genuinely thought we had given them gifts!!

We had to say our first goodbye at this point as Caroline was catching an afternoon flight to Bahrain. We’re hoping to meet up when Caroline next visits her Mum in Woburn Sands.

Having discovered the ‘rocks’ earlier in the week, today we sensibly moved further up the beach where there were a number of other swimmers. Anne and Steve headed in first – the waves were incredibly strong so Linda and I held back a bit. The current still had a fair old pull too especially dragging you out as the waves went back. Poor old Anne got caught with that, found herself suddenly out of her depth and struggling to beat the current to get back in – she’s a strong swimmer though so managed it … only to get tossed about in the shallower waves a few times in her attempt to stand up. It’s not exactly a family-friendly coastline in terms of swimming. 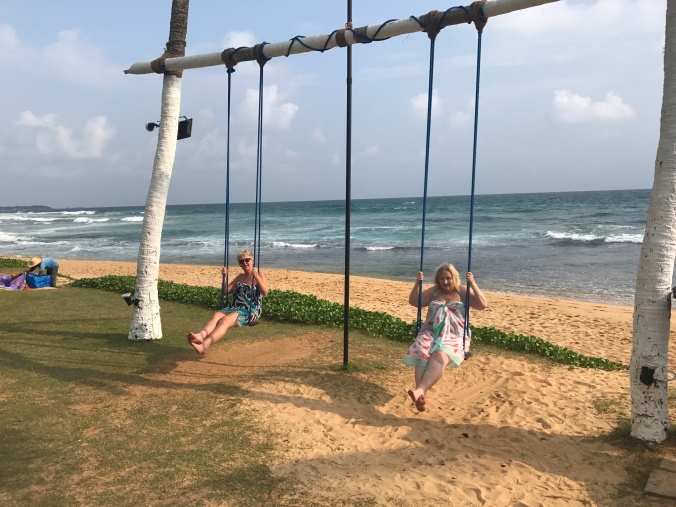 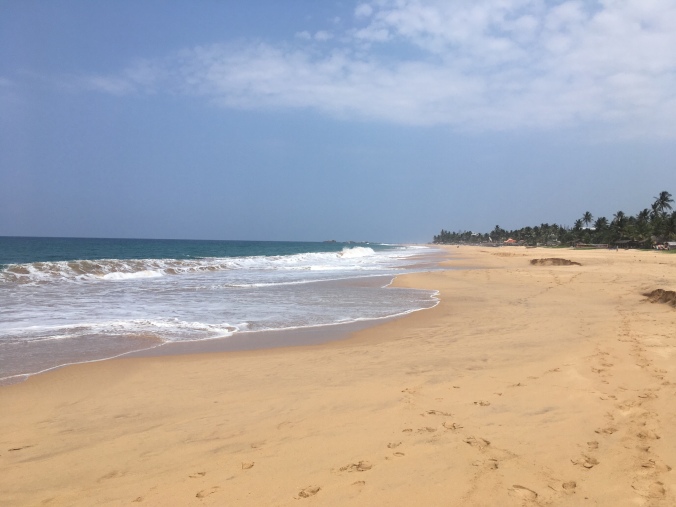 All decided to go home for a freshen up, Steve and I took a long walk home along the beach and spotted some interesting new eating places. Reserved a table at The Moonbeam restaurant – beautiful seafood platters. We all met there later … the setting was gorgeous and the food superb but the service was diabolical … one course and we were there over 3 hours! And rude waiters too – we went to town on Trip Advisor.

Steve and I walked home as it was late by this time and our tuk tuk rank had gone to bed. As we wound our way down the dark village lanes we seem to set off every dog in the neighbourhood barking …. and there are lots of dogs – sorry people of Catakarawatta!!

Had a bit of a lie in (well, I did … Steve had an early run up to the Fish Market) and then we met up with the gang at Turtle Beach, so named as it has some very large turtles that swim into the shallows. Theyr’e amazing – clearly so used to people, children swim along with them and they enjoy being fed with seagrass. 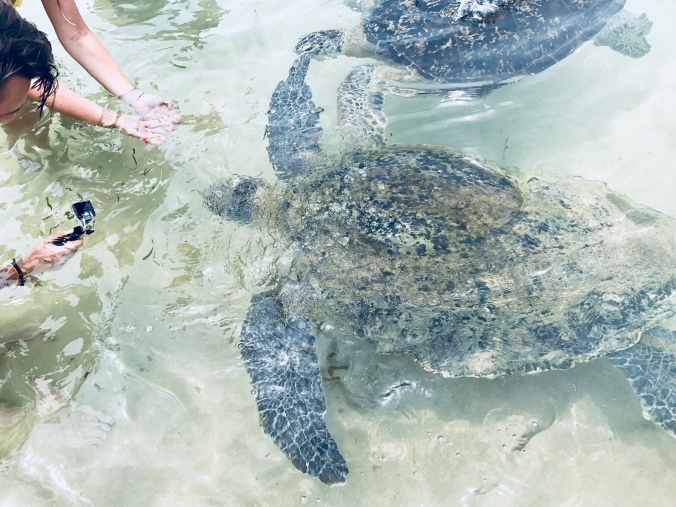 The beach here is a little bay so much calmer for swimming … and there is a coral reef for snorkelling – quite a contrast to the tempestuous seas on the main beach. 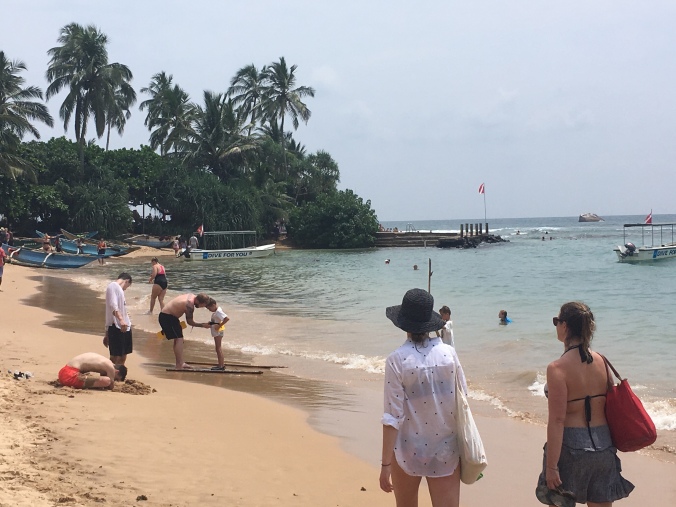 And now more goodbyes as Linda and Aiden were flying back to Dubai early evening – it’s been so fabulous meeting them.

So that left the ‘Fab Four’ – we arranged to meet later at Chill Space, another beachside restaurant. I managed a great party piece on arrival – a complete tumble off the plastic chair into the sand – oh so elegant!! Love this restaurant though – a great vibe as they say! 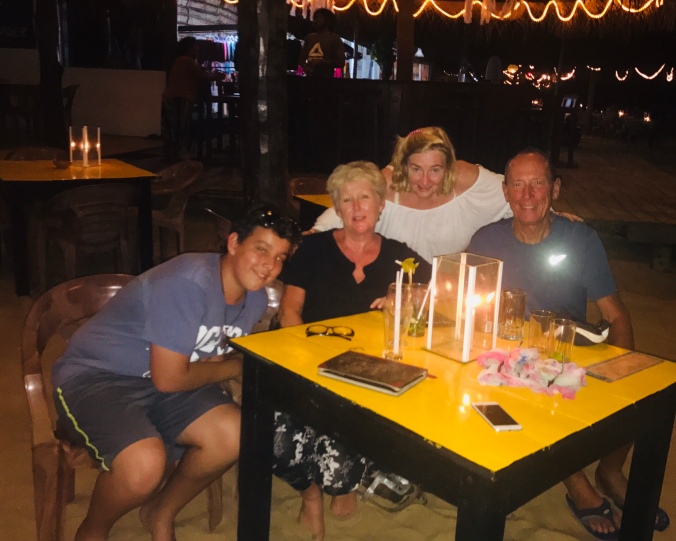 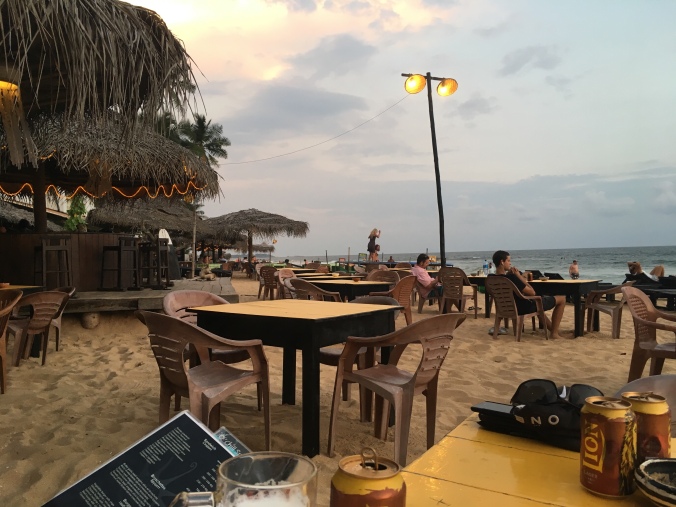 And yet more goodbyes – Anne and Nathan returning home to Dubai in the early hours of the morning …. it’s been amazing having these few days together … an incredible coincidence that we had independently booked to come to the same area of Sri Lanka at the same time. Great minds … and all that!!