Today we flew to Perth from Melbourne, returning to the part of Australia we first discovered on 1st December last year!!  This time we’re staying south of the city.  We flew on a roomy and comfortable Qantas flight – it flew by (pardon the pun!)  I was talking to the stewardess when we landed and she explained that this particular aircraft is going to be used for the 16 hour non-stop Perth-London flight, as of 24th March … and in fact all the staff are currently in training for this, including the pilots … not sure I wanted to hear that last bit!!

We are staying in a great Airbnb in Ardross, a separate apartment attached to the gorgeous family home of Rachel and Paul – a fabulous couple with 3 young children (+ Rachel’s Mum is visiting from UK) – we feel so at home here.

We arranged to meet Caitlin (our niece) in the evening at a wine bar local to us – Bad Apples (Caitlin is studying for 2 terms here at Murdoch University).  It was very special catching up with her … and lovely to get some hugs for Mothers Day.  She did so well to get to us as she had been on a private yacht trip to Rottnest Island during the day which had apparently involved large quantities of Moet!

Early to bed and early to rise!  The 3 hour time difference between Melbourne and Perth meant that our body clocks were playing us up a little.  We were mega tired by 10.00pm on the Sunday so headed for bed … and then we were wide awake by 6.00am on Monday morning.  Decided to get up immediately and explore our local area while fitting in a run and walk at the same time.  It took us 10 minutes to walk from our house down to the Swan River where there are nice flat paths for exercise of all kinds, complete with stunning views and the ever present wildlife.  Ardross appears to be a pretty affluent area but the mansions along this stretch are particularly spectacular – oh the envy!! 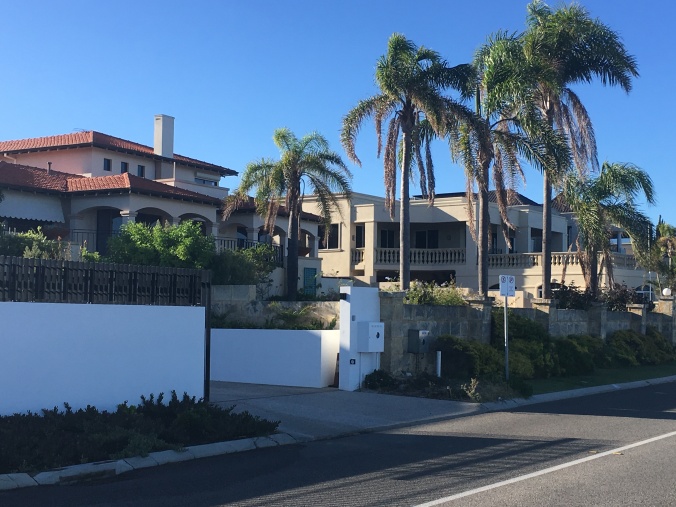 Haven’t spotted any ‘beware of snakes’ signs just yet, but came across these two signs that I thought were worth a spot in the blog. 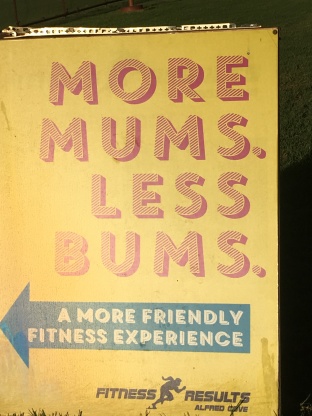 Saw hundreds of cockatoos who make an almighty racket when en masse, as do the lorikeets   The most deafening of bird calls though has to be the Australian crow – sitting solitary in the tree, with hooded head and piercing yellow eyes – you have to love them.  Also an abundance of black swans and pelicans on the Swan River too – looking so serene.

In the evening we met up with Caitlin in Fremantle.  While we were waiting (Caitlin was just about 2 hours late as she had taken the wrong bus!!) we got chatting to a lively aboriginal lady who told us all about her life and her ancestry … and all about her drunken husband – she was keen to show us around Fremantle but we explained that we had plans.  Had a few beers and dinner sitting outside at the National Hotel – inside there was a musician playing to just one customer – he was really good too!

Felt a little woolly this morning – obviously it must have been more than a few beers last night.  Headed off after breakfast to South Beach in Fremantle – temperatures were approaching 30 degrees so hoping for shade.  Beautiful beach, white (extremely hot) sand and clear blue water.  Spent a short time on the beach – had several dips (until Steve spotted a rather large jellyfish) then headed for some shade on the nearby grass area.

In the evening we travelled by good old Uber to the family house where Caitlin is staying for these two terms – met Ali and Brian and spent a lovely evening chatting and getting to know them.  It was one of the hottest nights we had experienced and we were sat outside, just hope we didn’t appear too sweaty!!

After morning exercise completed we had a chilled day and then headed into the city later to meet Caitlin.  Met up at Elizabeth Quay and from there took a ferry to South Perth – beautiful walk.  Came back on the ferry and had dinner at an Italian Restaurant overlooking the harbour.

And everything closes up at 8.00pm – life in Perth city comes to a standstill.  So deciding that an early night would be just the ticket, started proceedings by booking an Uber – didn’t arrive … lost internet service … walked to the station … no trains … bus replacements … had to wait half an hour for the bus we had been advised to take … bus didn’t go to our road so got off somewhere in the middle of nowhere … booked another Uber … finally got home about 11.00pm!!

Caitlin has no Uni on Thursdays and Fridays so she agreed to join us today on a 9km walk we had planned.  All checked for sunscreen, hats and sensible shoes – still a little warm.  Another beautiful riverside walk, with a lunch stop (of course) at the Raffles Hotel – lots to see and admire. 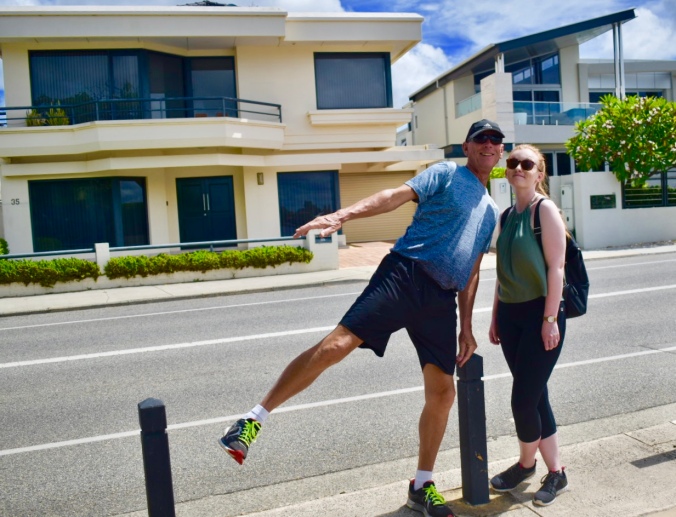 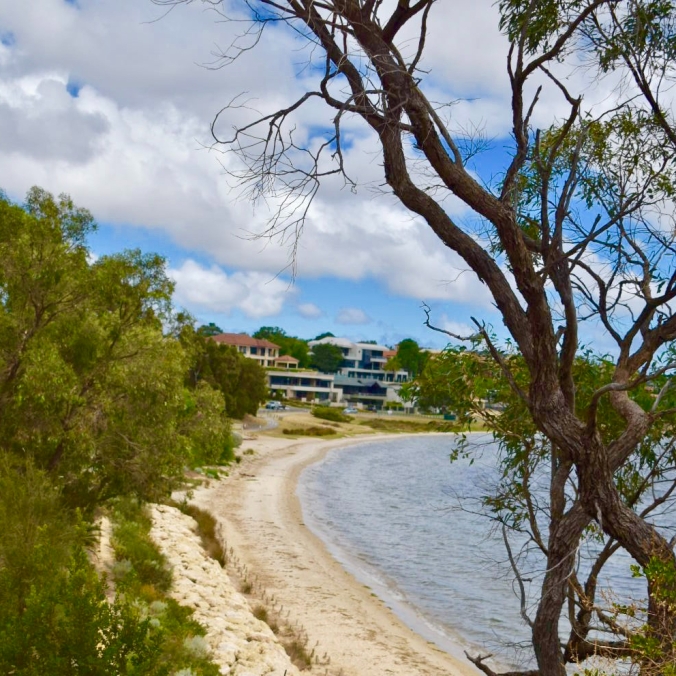 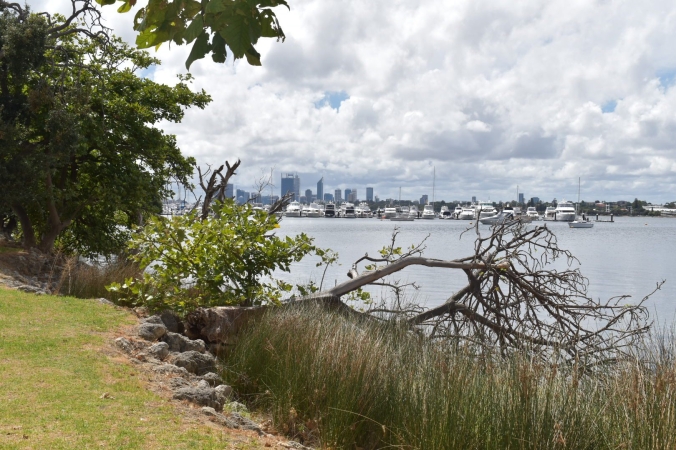 Back home for a swim in the pool, pizza dinner and card games – a fun evening.

Today we all headed out to Cottesloe Beach – Caitlin had been there a few times and wanted to show us a visiting Sculpture Exhibition – it was fabulous.  So a bit of culture followed by a swim and sunbathing … then bus & train to Fremantle so we could show Caitlin around Fremantle and South Beach … then another bus home.  We’re beginning to acclimatise to this life of ‘public transport’ – who needs a car!!?

And of course, Friday night is steak night!  Enjoyed a few glasses of wine with dinner and somehow managed to talk Caitlin into doing her very first Parkrun tomorrow! 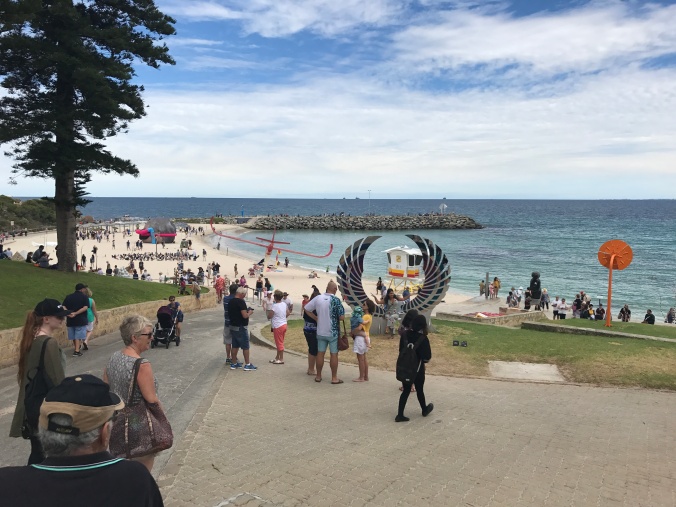 Caitlin and I bobbing about in the waves – Cottesloe Beach

Up at 6.45am in order to get ourselves to the Parkrun in time.  I am certainly not ‘match fit’ and Caitlin said she hadn’t run since she was about 15 – but we were game to give it a go.  Steve ever-keen as always!!  It was a bit of a hike to get there but beautiful walk all the same.  And we did it … we actually did it!!!  Might have walked a bit here and there but we completed it – and we weren’t last!  Met some really lovely people, some new contacts for Caitlin.  Another young family member dragged into the world of running. 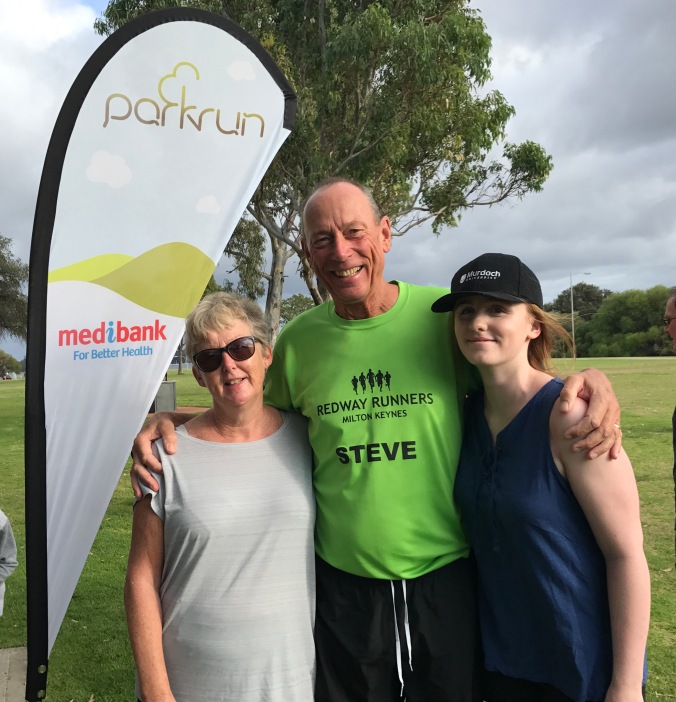 Showers and breakfast completed (oh, and I had my nails done!) we headed out to the city again – this time to visit Kings Park.  What a stunning place, well recommended by Caitlin (and previously by Andy) – had a beautiful walk around the gardens with fabulous views over the city.  Some really unusual plants and trees … and we saw a kookaburra.  Caitlin is great company and so knowledgeable about nature and wildlife … and she laughs at Uncle Steve’s jokes (Lookout!! – a particular favourite!) 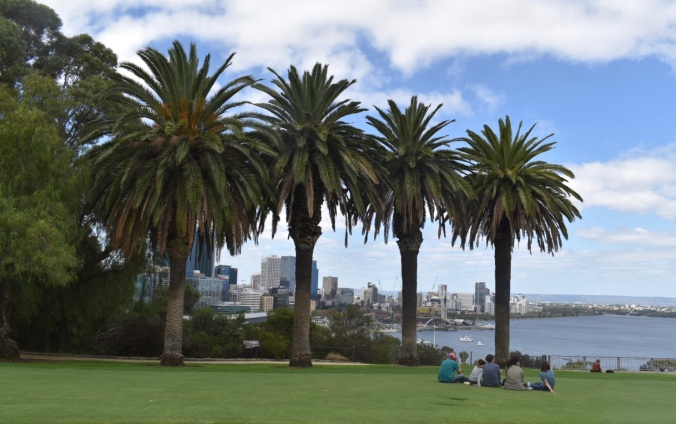 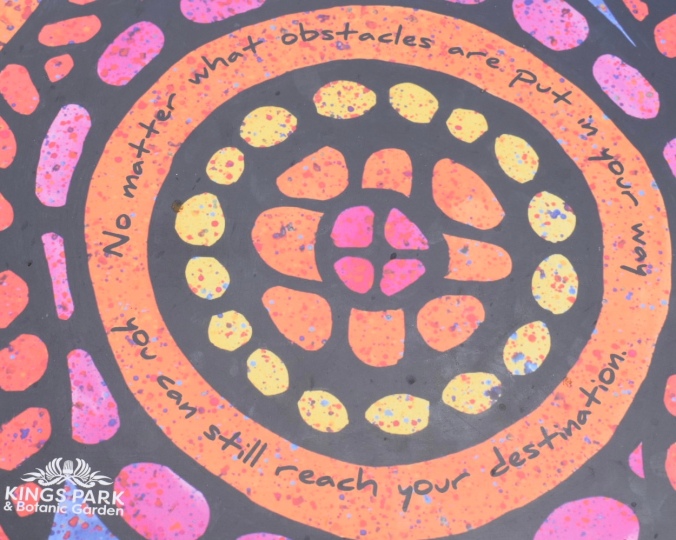 And then, being St. Patrick’s Day, we naturally had to find an Irish pub for a pint or two of guinness – plenty of places to choose from – even the non-Irish pubs had green-filled celebrations going on.  I’ve never seen so many people wearing green clothes, shamrock patterns and silly big hats during daylight hours – clearly a massive occasion here (or a great excuse for daytime drinking!)  As Caitlin said, everyone falls back on their 1-5% of Irish heritage on 17th March!!

We dragged ourselves away from the city after a couple of pints and made our way back to Applecross to end the week where we had started at Bad Apples Wine Bar.  Good food, good wine, good company … then home to bed.

Farewells all round – big hugs for Caitlin and wishing her an amazing time in Perth (lucky thing).  Farewells to Rachel and Paul – it’s been such a lovely home to stay in.

And of course, farewell to Australia – it’s been an extraordinary 3 and a half months and we will miss it beyond words.  Hope we can come back to your blue skies and happy lifestyle some day. 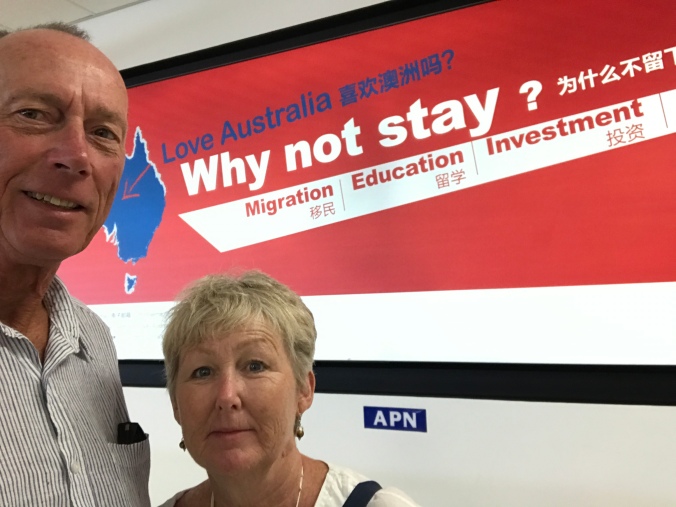