Off to Launceston today where we were staying for 2 nights before flying out from Launceston airport on Sunday morning. An absolutely stunning journey through the Cradle Mountain area. I have to say our chauffeurs Steve and Greg have done a marvellous job!! We drove through more mining areas too but most of the day we enjoyed being surrounded by tree lined mountains and the spiralling roads that go with mountain driving. We’ve hit some great place names on the way – ‘snake creek’ ‘double barrel creek’ ‘pea soup creek’ ‘weaning paddock creek’ ‘kookaburra rock road’ – you could only be in Australia. Drove though some quaint towns like Rosebery and Tullah – again like little pockets of land that time forgot. There is so much logging industry in this area … this involves very large and very speedy logging trucks on these narrow mountain roads. Often as we drove (slowly) down some incredibly step descents we would find cyclists just embarking on the climb … 🤨 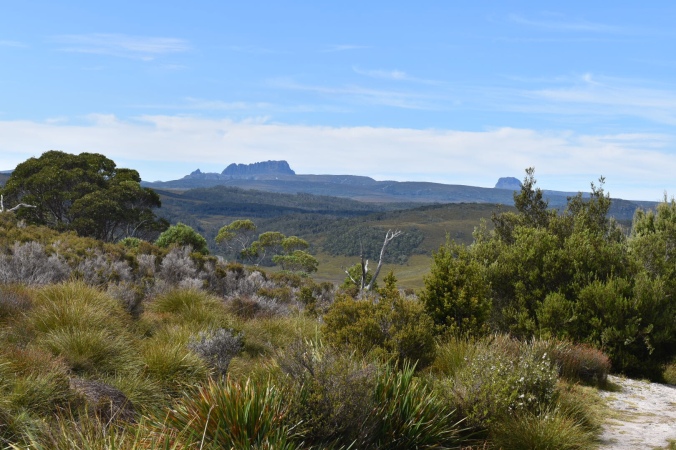 We were aiming to get to Launceston without too much stopover as it was Australia Day … and we wanted to get there for the celebrations. We had kitted ourselves out with fake tattoos in the morning (Australian flags, kangaroos etc.) – I had posted a picture of me with said tattoo on Facebook – some people believed me … Sorry, it was just a joke!!! We arrived at our apartment in good time – it was impressive on first sight – the building was an old gentleman’s club – it had a cathedral style ceiling, spacious lounge and kitchen. Unfortunately the temperature over these two days hit the high 30s and we had not realised in advance that there was no air conditioning. It was absolutely sweltering at night … very little sleep … and lots of mosquito bites from having the windows open – oh joy!!

But the weirdest thing of all was that the city was deserted – it was like there had been an evacuation and we hadn’t got the email!! We dolled ourselves up for a party night all the same then started wandering around the empty streets. We were laughing saying that we might walk into a restaurant and all the locals would jump out with Australian flags and shout “surprise!!” But they didn’t appear – we still had a lovely meal, followed by a walk around town, a couple of drinks and then retired home for an earliesh night.

It was a long night however – as mentioned before the extreme heat kept us awake + the mosquitos … and on top of that we were opposite the town clock which chimed every quarter of an hour, it was like sleeping (or not sleeping) next to Big Ben!!

Saturday 27th January 2018
Steve was up and out early to the Parkrun – admirable effort on such little sleep. Greg got up early too and went to the gym. Kaye and I … well, we just dozed!!

When we were all reunited we headed out for some breakfast – nothing like a good nosh when you’re feeling sleep deprived. From there we decided on a walk out to Cataract Gorge … the local information centre informed us that it was a pleasant walk with opportunities for swimming. But that didn’t prepare us for quite how magnificent it was going to be. We took the left hand walk on the way – the ‘boys’ had decided that we’d save the easier path for the way back!! Nearly killed us, it was a steep climb, step after step after step … it was like being back on the South West Coastal Path … except it was 32 degrees!! But all the agony was SO worth it when we arrived.

We all jumped into the beautiful gorge river – I had never experienced anything like it. Greg, Kaye and I swam over to the waterfall area under the bridge – fabulously cool fresh water, so deep and open – surrounded by stunning mountains.  On the swim back however there was a group of teenagers squealing about an eel in the water .. “look how big it is, it’s huge”… even Greg agreed with them but was laughing …. I on the other hand swam like my life depended on it – I was like an Olympian!!!  I had seen a washed up Moray eel in Thailand (see blog – The Tale of the Longtail Boat) and I knew how big their teeth were!!  Opted for a more sedate swim in the open air swimming pool with Steve afterwards, followed by a few hours of lazing in the sun.

The walk back was so much more pleasurable and manageable with spectacular views of the gorge all the way along … completely flat in comparison to our earlier walk.

After our fabulous day, we refreshed ourselves and set out to find somewhere to eat. Settled for an Italian meal – delicious – and then thought we’d pop in for a night cap in Henry’s (the restaurant and bar below our accommodation).  It was rather posh with elaborate rules posted up (no thongs, no trainers, no shorts, no dirty clothing ….) but they allowed us in anyway …. and we had a few drinks in their oh so sumptuous lounge.

Up early for the drive to the airport and our flight back to Melbourne.  It’s been a fabulous week –  Tasmania is very high up on the list of favourites.

Off we go again … back to Melbourne