A bleary-eyed foursome (Steve, me, Kaye and Greg) were up at 4.00am and on our way to the airport by 4.30am. Flew Jetstar to Launceston, Tasmania – a no frills airline but OK. Arrivals busy but we made our way merrily through the throng of holiday crowds – a little drama as we waited at the baggage reclaim – Greg was approached by the airport security hound and his handler … and was found to have two bananas about his person – it was a fair cop!! Hope that beagle enjoyed his bananas.

Smoothly picked up our hire car and set off to our first destination – Hobart. It was a fair old drive so after a couple of hours we stopped off in Campbell town for refreshments – coffee and pies (the Australians do make a good pie you know). Tasmania is absolutely stunning – you can never tire of the scenery – mountainous and green, long stretches of vineyards and olive groves … and this part of the journey along the East Coast was breathtaking. Between tired yawns and swerving the roadkill, we made our way along the bendy mountain roads – took another little stop at Coles Bay.

After much discussion we made the decision to pay the money to enter the National Park and take the walk up the mountain in order to view Wineglass Bay – a much recommended attraction. It was pretty hot as we made our way up the dusty climb – a pretty climb though with constant views of the bays, interesting geology and vegetation. About half way up, Kaye and I had stopped to catch our breath, when I heard “Oh my God, Deirdre” – it was India Goodlake. (We had planned to meet up with India – Warren’s daughter – the following evening – she has been living in Tasmania for two years now … but to meet her half way up a mountain was such a coincidence). So, after some big hugs and introductions to her two friends, we all made our way on up to the top with non-stop nattering. And, oh boy, the climb was worth it … spectacular view of Wineglass Bay – took your breath away in more ways than one! 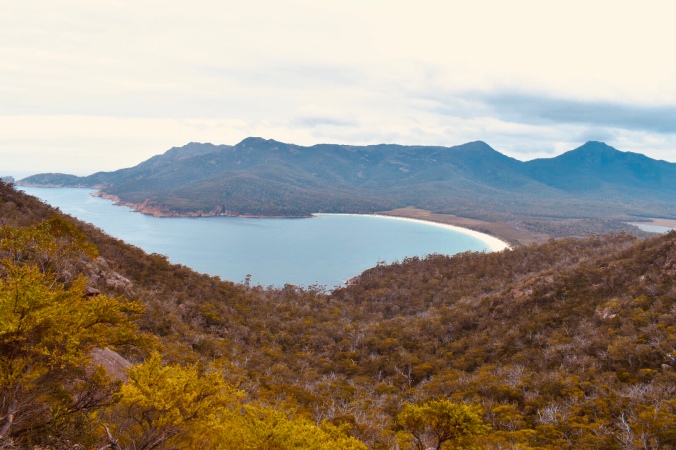 Then it was goodbyes (for now) and we continued on our journey to our airbnb destination – we were staying on a farm in Kellevie, just short of Hobart. Our faithful GPS continued to talk us through each step of the way …. and why would you question that!!? Greg had taken over the driving by this time, and his 4 wheel driving skills came in handy as we found ourselves on a ‘offroad’ track …. that went on and on and got steeper and steeper, with huge drops at the side!! My nerves began to jangle but I was comforted in being informed that this was an adventure!! It would seem that the GPS had taken us on an ‘alternative’ route, but we eventually found our farmyard cottage, out in the middle of nowhere. We had chickens and a cockerel in the garden and the views over the fields and mountains were to die for. The house itself was ‘a little tired’ – reminiscent of our grandparents’ homes – from the dark furniture, musty smells, old family photos and clanging pipes when you turned the tap on … but exquisite location. As we were settling in, Mark the farmer came to say hello, bearing gifts of cherries from his orchard and some delicious cherry wine. He asked us if we minded if he brought the sheep into the garden in the morning …. well what could we say!?

Steve opted to stay and watch the one day cricket on TV while Kaye, Greg and I embarked on a ‘very steep’ walk to the top of the farm … we were well rewarded with the views. The sheep came too – the higher we walked, the higher they ran – all following each other.

We found ourselves a little off-track as Greg had taken us exploring, and so making our way down the hill we found ourselves amongst some grass that was longer than we would have liked it to be! And yes, guess what, I stumbled across my first snake!! After weeks and months of dreading this, it happened so quickly – it slithered, inches away from me, into the long grass and disappeared – I froze, then called out to Kaye and Greg … but it was gone. Luckily, it was a smaller variety of snake, a white-lipped snake (or whip snake) but the farmer informed us that they are venomous.

After this trauma, I hot-footed it back onto the path and was down that hill in pretty quick time.

We had dinner in, washed down with wine … naturally! Our first night in Tasmania. Enjoyed the amazing views and farm animals surrounding us – sheep, cows, horses, chickens … we even had a visit from a kookaburra. 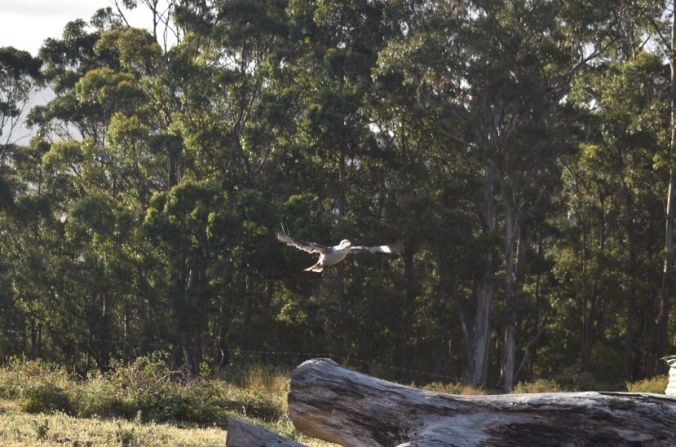 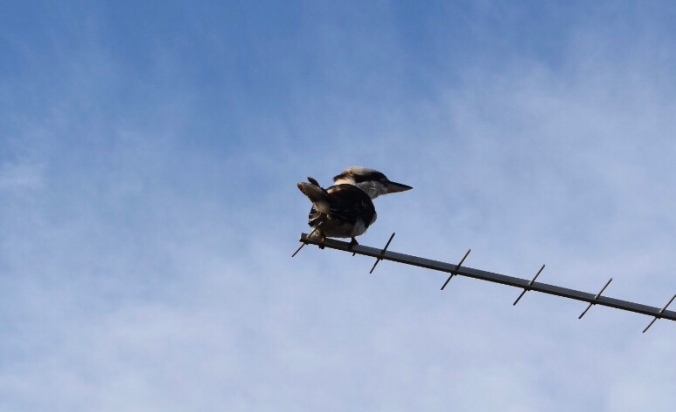 And so we had an early night (after our early start) – that is except Steve who stayed up to watch the cricket whilst slowly tucking into the cherry wine. At midnight he woke me out of my deep sleep to come and see the stars – they were quite incredible I must admit … but very soon I was tucked back up into my oh so comfy bed and the Zs resumed.

Tomorrow we are heading back to city life …. Hobart x