The intrepid three took on the feeding the monkeys challenge, with Dee taking the decision to take charge of the sunbeds by the pool, also slightly daunted at the thought of kayaking up the river to feed aforementioned jungle / swamp inhabitants, particularly having been informed of the local water snakes!!

We had heard over the previous few days of other guests’ adventures with a bunch of bananas and a group of monkeys (get it…group / monkeys?). Our resident English Gentleman Mr O (Adrian) had ventured out on the kayaks the day before only to find the tide was going out down the river and he was headed for the bay rather than the monkeys! It was no joke as it was nearing beer o’clock and it had been a hot day. If all failed though Adrian had a plan to go with the flow in the direction of the Beach Bar, a cunning plan!

So midday saw not only the sun making a very hot appearance but also Steve, Alice and Marc heading out to the local harbour. We are staying in a very local Thai village and where possible we have been trying to support the village economy and this was an occasion where for £10 the band of three acquired two kayaks for an hour and a very large bunch of banana’s (for the monkeys stupid!). Now you might think that an hour is not long but believe me in 30 degree temperatures and very little shade from the sun something nearer 5 minutes would have been preferable! Anyway we set off with Alice and Marc leading the way with the tall bloke left to paddle his own oar at a more sedate speed, SLOW IS A SPEED! I should point out that I love wildlife but the last time I was close up with monkeys we were in Gibraltar and on that occasion you had to be very aware of phones/hats/glasses/hair/jewellery or anything not fixed being ‘nicked’ by the monkeys. So the thought of having any number of swamp monkeys jumping on my boat was quite a daunting thought – however Alice was very keen so I kept my thoughts to myself.

Initially we were pleased with progress to the monkey area, they live in trees in the mangrove swamps which border our village along the river banks. We’d been told they can swim, as well as peel bananas, open plastic bottles and I guess do a song and dance if so required? No sooner had we arrived than we had monkeys jumping onto the kayaks and soon we were busy distributing the bananas. One cheeky monkey settled himself onto Alice and Marc’s kayak and helped himself to their sun tan lotion bottle, lifting the lid and having a good lick! On deciding he didn’t like it he threw it off the boat – then retrieved it from the water, had a second lick and threw it off again!! They thought nothing of putting their paws up the back of your T-shirt and pulling at the back of your shorts!

But boy it was hot out there, sat in a boat in the full sun with the only shade being under the trees which then encouraged lots more monkeys onto your boat? Anyway it all went swimmingly and after feeding time we went for a leisurely paddle upstream taking in some of the local Thai culture. This is very much a fishing village still, with only small pockets of tourists – to say that a six foot odd tall bloke wandering (or at times running) through the village caused some attention I would not be under estimating at all. The hour soon passed and it was time to return the kayaks, just as well because we were scorching although good time had by all and some great pictures for the memories! 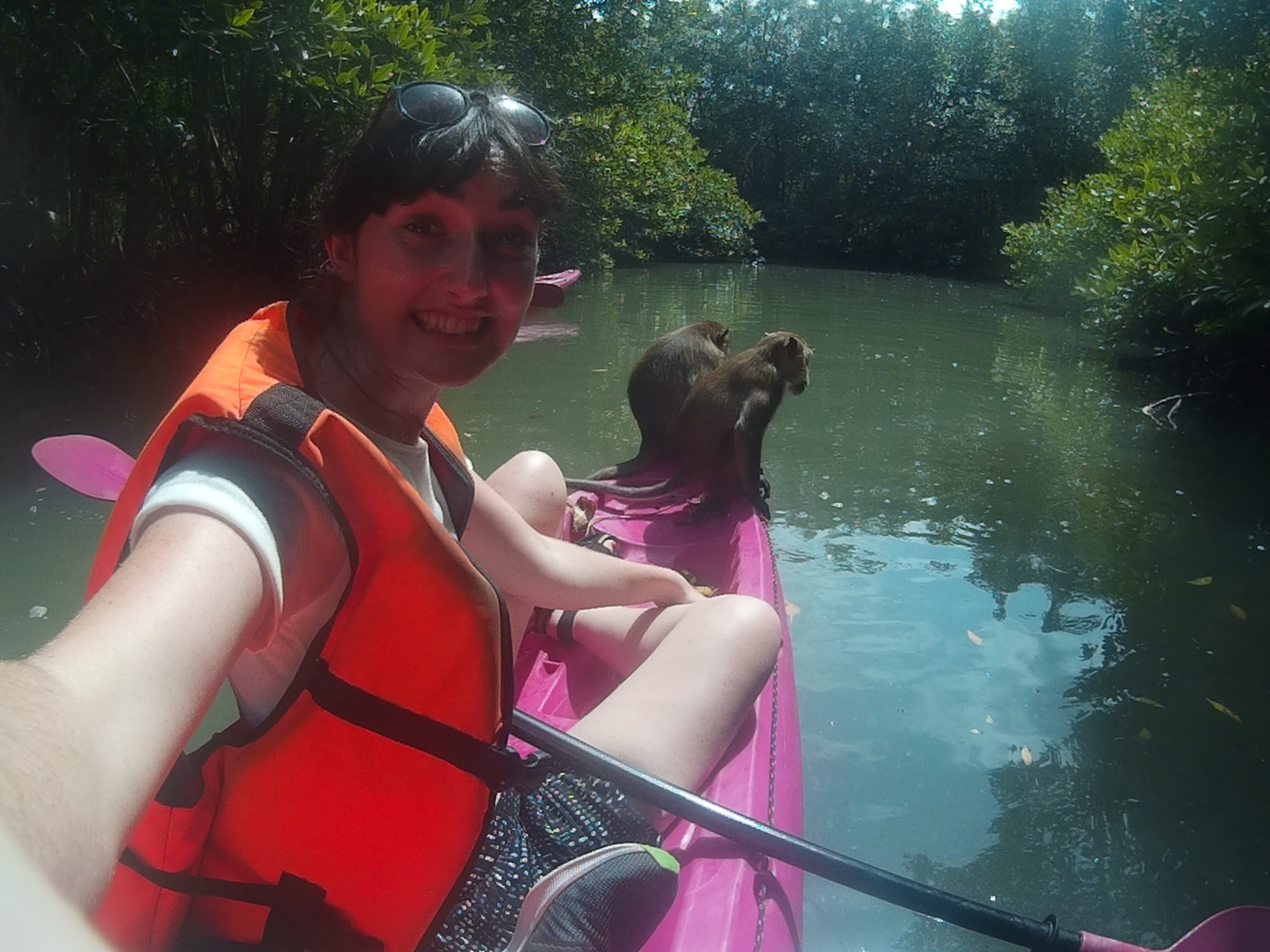