Oh yes, today was travel day. Having made the decision not to stop off at Guanobo, this meant a straight through bus ride to Havana. Our previous experience of the Viazul bus service had not been too cosy an affair, so we’d mentally prepared ourselves (we were saving ourselves around £60 after all)!! We said our farewells to Varadero and walked along the dusty streets wheeling our suitcases (in the midday sun) to the bus station.

Now being British we had all our strategies in place – (1) arrive early to get near the front of the queue (2) Steve deal with the suitcases while I nip on to the bus and grab seats. And mission accomplished – we got two seats together near the front of the bus … and it was actually a really comfortable ride. We would have had to negotiate with the driver if we had decided to disembark at Guanabo, and when we reached that area we saw that it would have been a case of being dropped off a fair way from the destination … so all in all we had made a winning decision.

Stepping off the bus in Centro Havana we were bombarded by taxi drivers and room-renters of all sorts – a tad overwhelming! I retired to sit on a bench while Steve retrieved the luggage … but became even more of a target as I was a woman alone! I was particularly receiving a barrage of information from a chap with one arm …. I know it’s probably not very PC and not particularly promoting diversity – but there was no way I was going to get into a taxi with a one-armed driver, whether it was a car, bike or horse and cart!! We managed to escape and find ourselves a yellow state taxi to drive us to our very splendid hotel – Hotel Sevilla.

So, our first luxury accommodation since we’ve arrived in Cuba, it’s stunning. A very old hotel, steeped in history – a little shabby in places – but oh, the joy of having a large bedroom, big bed, cotton bedding and pillows, a grand lobby filled with people, live music in the cafe area day and night, fabulous pool, roof top bar – we are appreciating every scrap of this magnificent place. 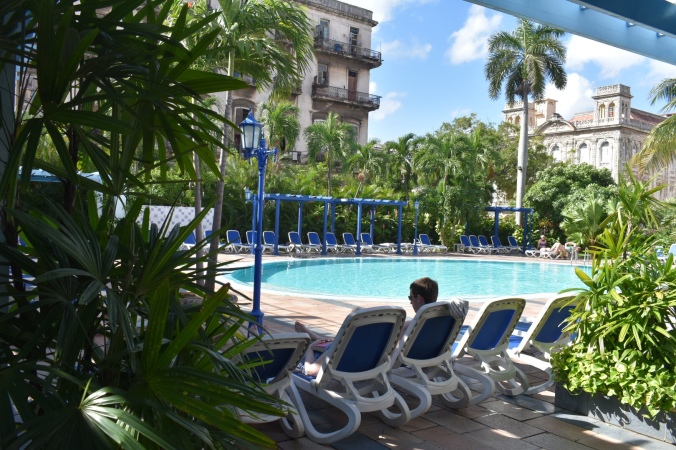 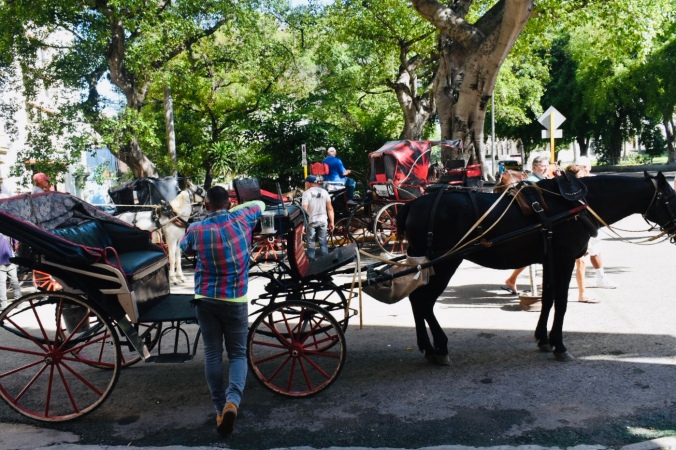 As soon as we had dumped our bags, we went to explore the hotel facilities. The pool area, the gym, sauna, patio bar/coffee area, dining area etc. And then we ventured outside to get the local area sussed. We battled our way through the hordes of city tour guide touts, though very tempted at some of the gleaming American cars … and walked into the streets of old Havana. We found a couple of pretty streets, with bars, cafes and shops – there for the tourists of course but still in a very Cuban area. We stopped for a beer before going back to the hotel.

Rather than change we thought we’d keep going so up we went to the 9th floor of our hotel to try out the Roof Terrace bar and enjoy the fabulous views over the city – 2 pina coladas later we headed back to old Havana and enjoyed a delicious meal in an Italian restaurant. We had great chats with the owner, a young girl called Sofia …. and she insisted on us having free rum after we’d polished off a bottle of red wine! And so by 9.00pm we’d had rather a selection of alcohol beverages and were ready to get our heads down on those comfy pillows. 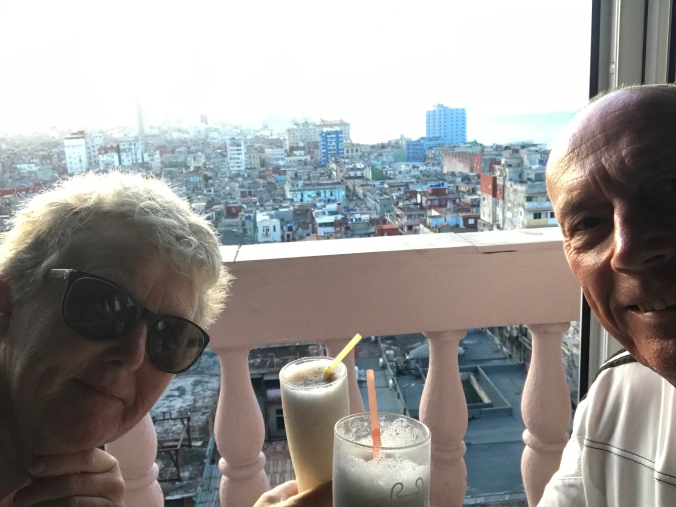 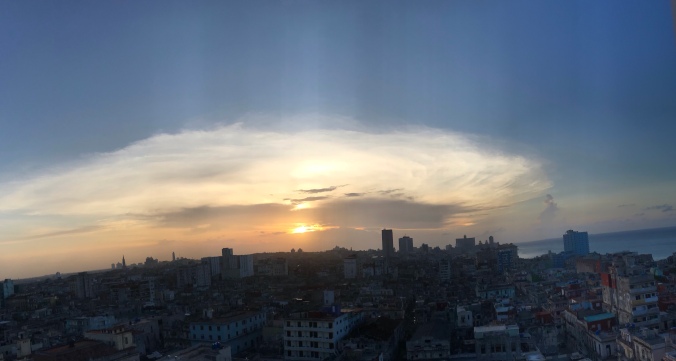 Surprisingly we were up early and excitedly went down to discover what was on the breakfast menu. Not great! A buffet of course, and fairly limited – we were disappointed but made the most of what we could find. And then we were straight out for more exploring of the city. We’re so pleased that we’ve based ourselves in Havana Centro as it’s in walking distance of so many of the great sights. It’s an architectural dream here – you literally can’t help but take photos, we have hundreds of them. Definitely a city of contrasts however – the most magnificent buildings, that compete with the likes of Paris, Rome and London …. but so much of the city has been left to crumble. The pavements and plazas near these grand places are clean and neatly paved but as soon as you enter the side streets where the Cuban people live you’re walking in unhygienic conditions and pothole ridden streets. But we love having a good root around all the different areas – it’s fascinating. Again we were constantly approached by men selling city tours – you get the hang of it after a while. 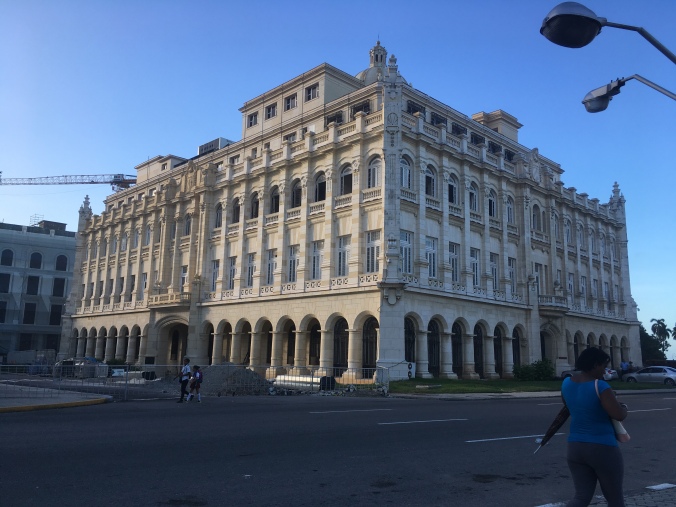 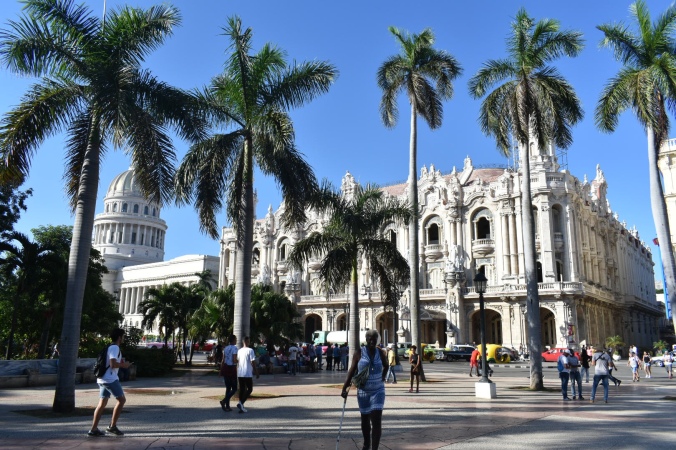 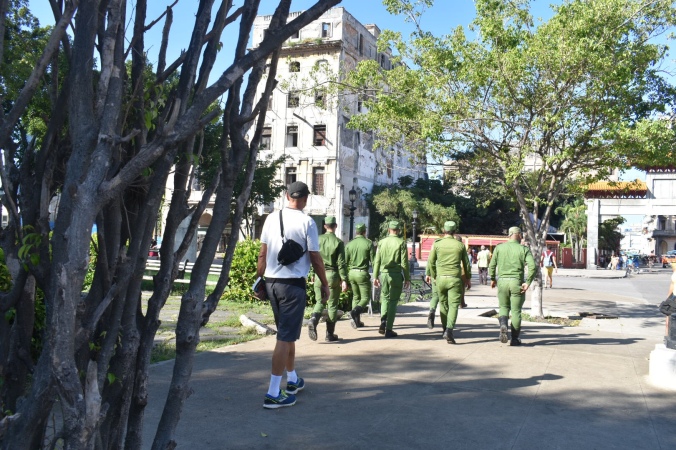 By midday it was getting too hot so we returned to the hotel. Thought we’d give the gym a go – 20 minutes was all we could manage … there was no A/C and the sweat was literally pouring onto the equipment – it became a health and safety hazard!! So we showered and enjoyed some lunch at the poolside and then an afternoon of lounging.

In the evening we walked into Old Havana again and found another lovely restaurant that was affordable – I had my first salad for 5 weeks – a blue cheese salad, it was heaven. I say affordable because we’ve been so surprised at the prices in Cuba – it really is not cheap at all, especially when you’re having to eat out every night. We called in to see our new friend Sofia at the Italian restaurant and enjoyed a sangria before heading back.

Up and out walking again this morning … it’s great to be able to walk but I think the tour guides think we’re a bit odd. Today we walked down to the seafront and along the Malecon – Havana’s 7km long stretch of coast road …. and then back to the hotel. We didn’t do the whole 7km as it was getting incredibly hot so we cut up a road to bring us back …. and, despite Steve’s complete faith that we were heading in the right direction, we WERE lost. After 3 hours of walking we finally recognised some landmarks and were relieved to get back into the air-conditioning of our hotel. Saw some amazing sights along the way though … and had the afternoon to cool of poolside. 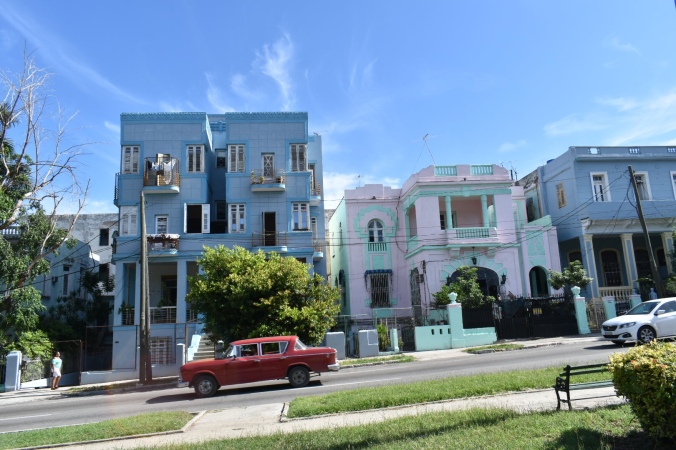 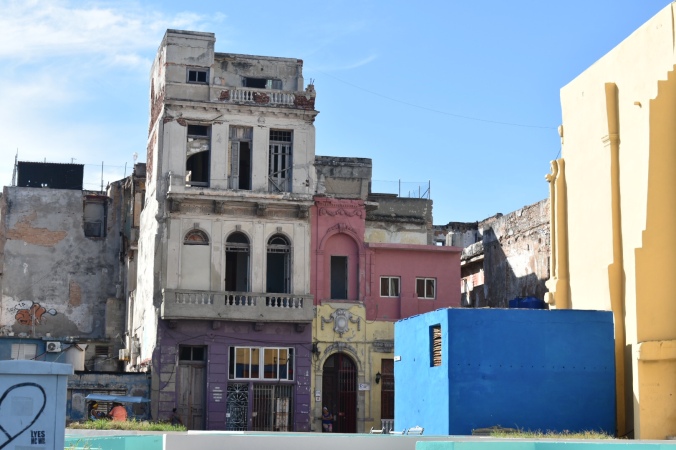 In the evening we stopped off for cocktails in the patio bar and joined in with some salsa dancing lessons – Steve had a go too but didn’t enjoy it as much as me … I love a bit of salsa and rumba … I was in my element.

We had dinner at Sofia’s again and enjoyed watching the young children parade up and down the street in their Halloween costumes – didn’t seem to be bagging many sweets however!

Had a bit of a lie in this morning – holiday’s can make you weary you know! After breakfast we went to listen in on a talk by the concierge about the history of the Hotel. Fascinating stuff. Built by the Seville Orange family from Spain. Al Capone, Graham Greene, Ernest Hemingway were all previous visitors here in the hotel. During the prohibition, the mafia requisitioned it as their operations centre. There was a bank for money laundering and two casinos. Looked at some great photos.

Steve and I then split up for the rest of the morning . Steve went for a run and to do some more walking and I continued on a cultural path – I went to visit the National Museum of Cuban Art. An absolutely fabulous gallery and would definitely recommend it if you are in Havana. A huge amount of modern art poignantly reflecting Cuban life. Naturally a fair amount of pieces depicting thoughts on the Revolution and Fidel and Che get the odd look in. I loved some of the paintings from the earlier days of sugar plantations and slavery – some beautiful artwork and very thought provoking. 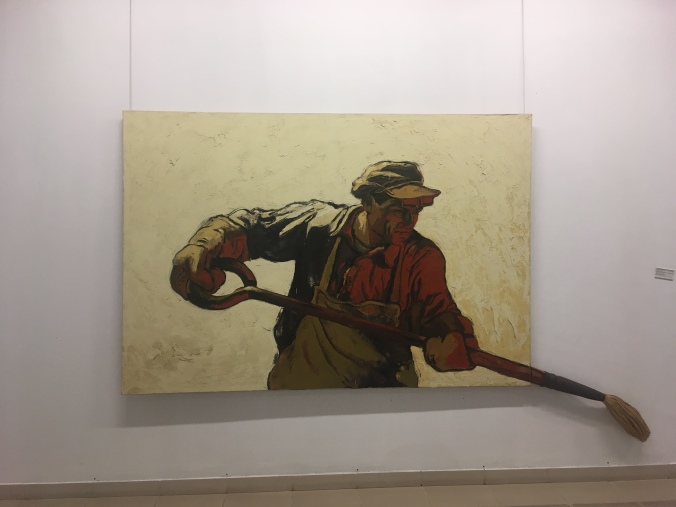 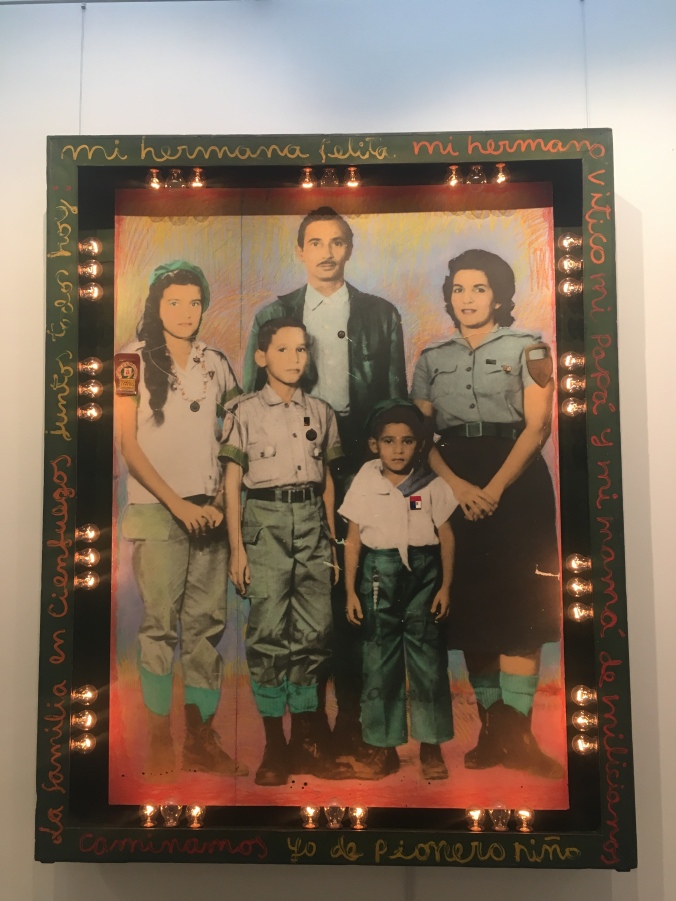 It was lovely to reunite over lunch and share what we had done – it was the first time we’d been apart in over 5 weeks!!

And in the evening we had a real blast … we went on an AirBnB experience. We met up with Rocci (a lovely young Cuban girl) and her two sidekicks Victor and Mario in a trendy bar in Centro Havana. Rocci explained that the bar had been set up on the ground floor of someone’s home – it is only in recent years that private enterprises have been allowed and so some people are using their family homes to set up bars, restaurants, shops etc. We were joined by 12 other visitors of all ages and nationalities and we had a few drinks while getting to know each other. Naturally Steve and I were the oldest members! Then we all walked together to a music venue called the Buena Vista Social Club. It was a huge old building with a room tastefully set out with long tables and fancifully dressed chairs. I guess it was for tourists but it was a pleasant environment … and our group were having lots of fun. We had drinks and a meal (pork and rice, naturally) and then more drinks. The music was absolutely first class – Cuban music from the 40s and 50s and going – a whole line up of solo artists taking turns, the majority of them looked well into their 70s. The atmosphere was amazing – impossible to sit still. And then there were the dancers who were a real showpiece. But the best bit was that we were all up dancing, Steve too (and he loved it this time) We danced the night away … I had two ‘young men’ (Victor and Mario) asking me to dance all night – it’s been a long time since that’s happened. And Steve and I were in the final 7 of our group that stayed to the very end – 11.30pm!! It had been a terrific night and we giggled our weary dancing legs home!

We ventured out on an open top bus tour this morning – always a good way to get an overall impression of a city. We stopped off at Plaza de la Revolucion and also the Cemetery … can’t help but be amazed at the grand headstones here in Cuba. The tour also took as down to the cruise ship area and the docks where we had a brief look at a local craft market. You had to be so careful of low bridges and low hanging overhead cables – I even found myself crouching so goodness knows how Steve felt … and if you’d stood up you’d have lost your head!! Hundreds of photos of course, so much to see. 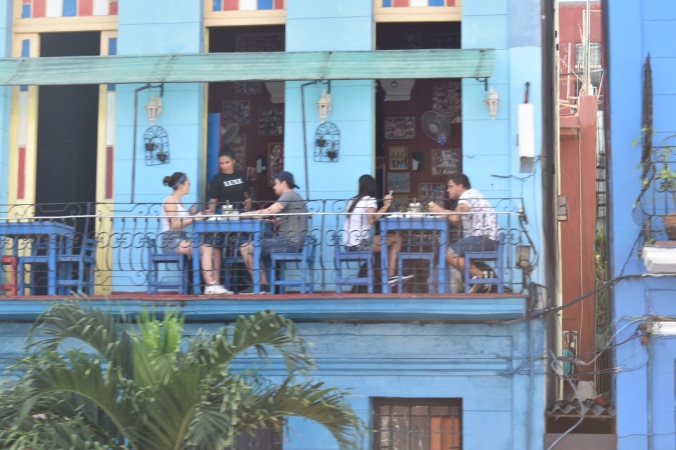 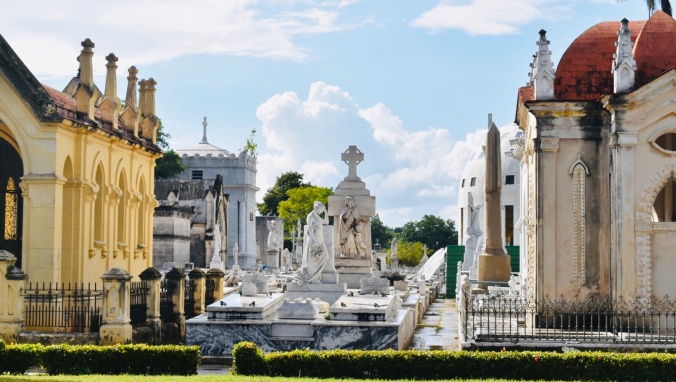 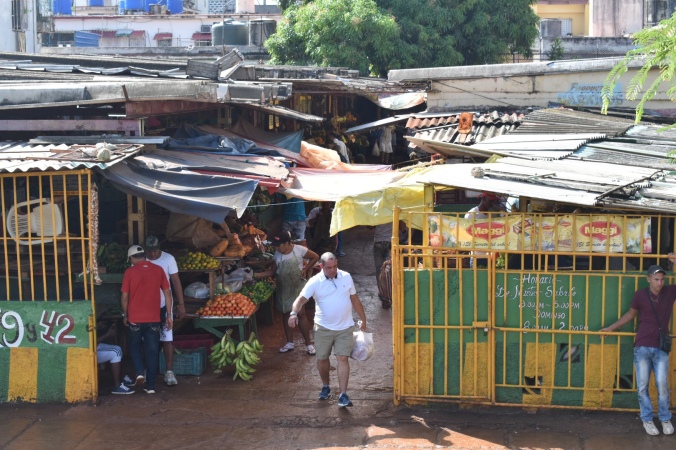 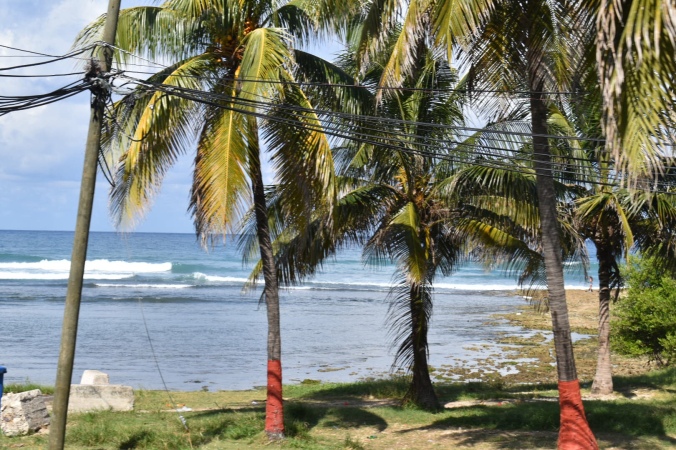 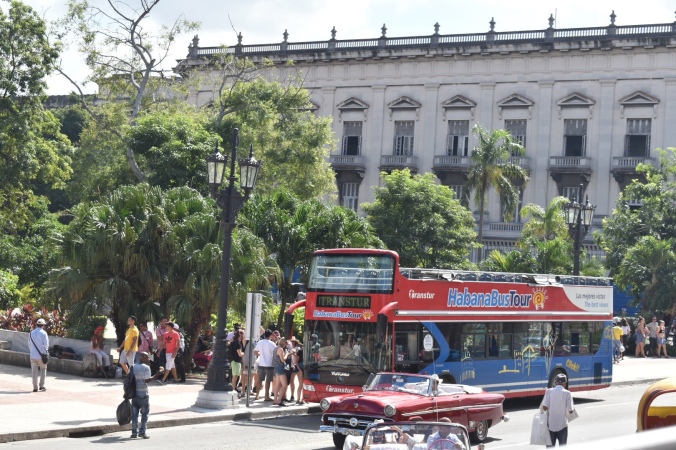 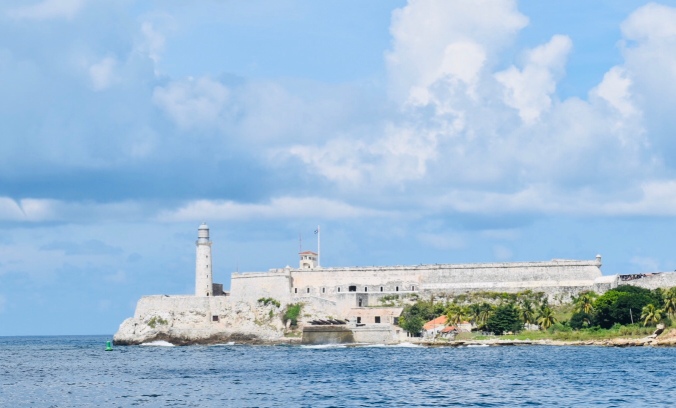 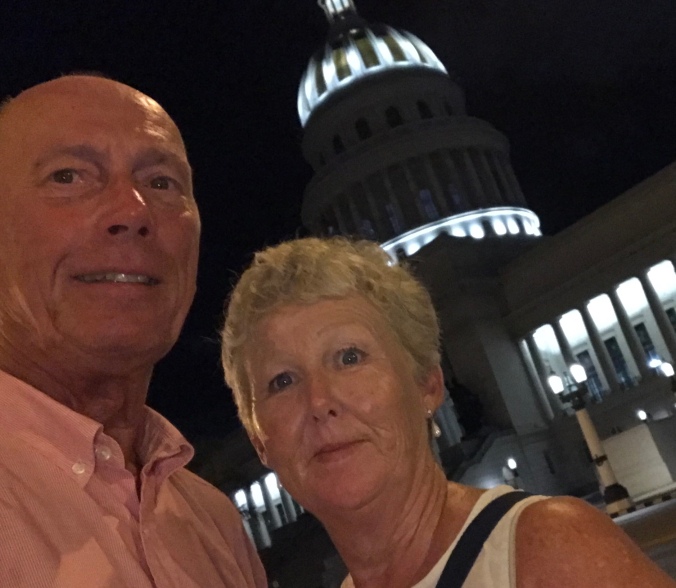 So we’re halfway through our Havana week – countdown now … these last few days will fly!

A teeny bit excited about coming home to be honest! 😊❤️