Today was a day of HEAVY rain – a sort of non-starter day. Every time we made plans to do something it would start to pour again, so we just muddled our way through the day – reading, blogging, listening to music etc. Getting a blog done here takes the patience of I don’t know how many saints!! Especially with photos downloading … it’s like watching paint dry! So far we have been using the internet through our ‘Casa’ and it’s unbelievably slow, hoping to find alternative methods.

Luckily the weather improved in the evening so we set off for the city to meet our friend Odelquis who was to take us out on a music trip around town. We stopped for some pizza and chips first at the Hotel Casa Grande – lining our stomachs. Our friendly guide arrived and joined in with our mojito round – then whisked us off to the first music venue which was quite smart. A great Cuban band and more beers/mojitos. Odelquis got me up dancing – he was amazing at leading me in salsa dancing, quite the expert – I loved it. 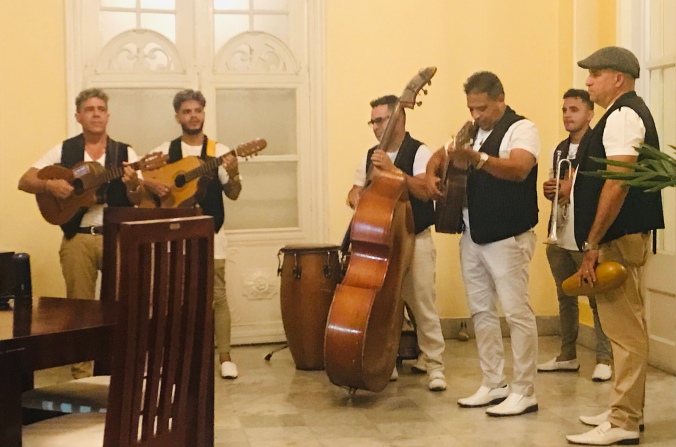 It was fairly quiet in this venue however so we moved onto a more popular lively club – a line up of young talented Cuban musicians, singing and dancing and lots of audience participation. Both Steve and I were led into the salsa experience – Odelquis for me and a young Cuban lady got Steve up on his feet. More beers, more mojitos, more fun! We got chatting to a couple of the American musicians who had been on our plane out – they’re in Santiago on a musical trip. We had a great night all in all but spent an arm and a leg … everybody wanted money from us and sometimes it’s so hard to say no, especially when you’ve consumed too many of the local cocktails!

Immediately realised that 7 mojitos is a couple too many – it was to be a bleary day ahead! Our casa host, Susy, has had to go to Havana for a couple of days which has left us with Aunty and Grandma, who speak no English – this is going to be fun! A beautiful blue sky day so we spent most of it lounging in the sun, dozing, swimming and just generally recovering from our wild night out! 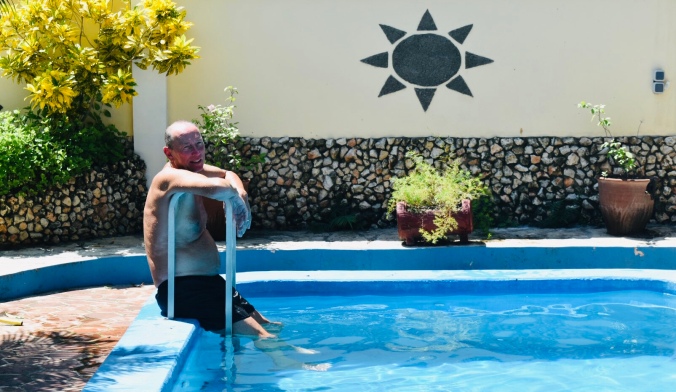 With lots of hand gestures and google translation we can make ourselves understood – we got through breakfast, ordering coffee, ordering lunch and taxi request with ‘Aunty’ and with ‘Grandma’ we just smile lots and say ‘Ola’ and ‘Esta Bien.’

At 3pm we headed off by taxi into the city again. It had cooled a little so we wandered around some different parts, trying to find the music venue that the Americans were playing in this afternoon. After 3 or 4 miles of walking however we still hadn’t found it … we did however find the telephone shop where you can buy internet cards, so naturally stocked up. We’ve finally cracked it …. you buy these scratch cards and then find a Wi-fi spot, normally the plazas, where you log in the code provided to access an hour’s internet time – it’s easy once you know how! After a bite to eat we got lured into a truly authentic Cuban music experience – rows of upright wooden chairs and they insisted we sit right at the front … and apart from an old lady (who kept nodding off) we were the sum total of the audience. The band were hilarious, all old chaps, so passionate about their music and singing and trying desperately to entertain us. We sang and clapped along and smiled lots as way of encouragement … and naturally we bought the CD! We even got up and danced when they played ‘Guantanemera’ especially for us. Luckily they took a set break and we were able to slip off without too much protestation to find our taxi.

Santiago de Cuba is known for its love of music, especially at weekends … last night it seemed to go on till the early hours! And then we woke up to church music … quite the contrast. Felt refreshed however, having stuck to water last night.

Had a chilled out morning, hanging out with Beethoven the dog and the cat, who’s name we’ve not quite grasped. 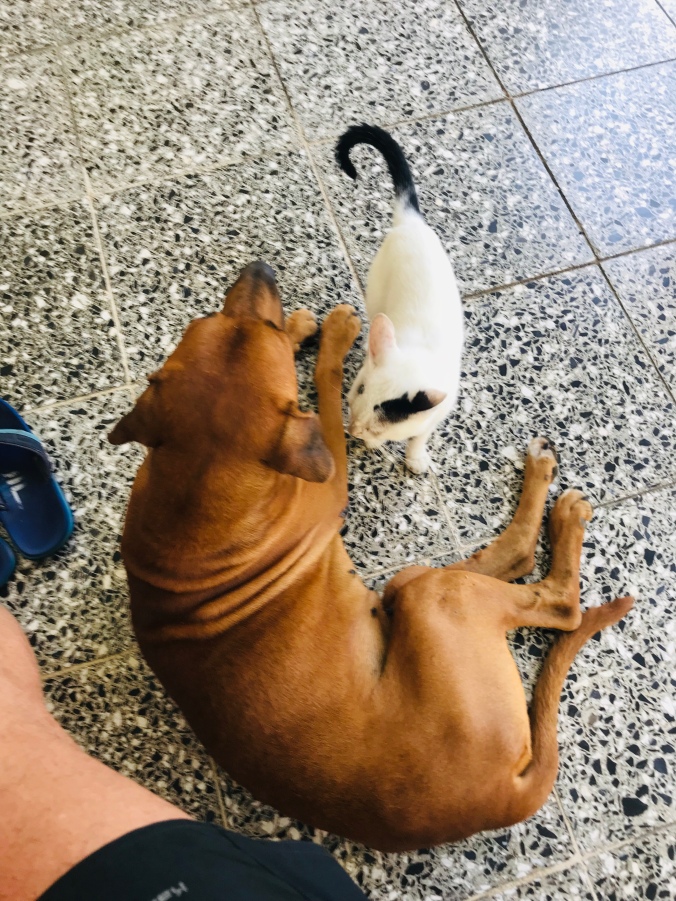 They’re clearly loved these pets but sadly when the cat bothers us at breakfast he gets the wash basket put over him with a bucket on to weigh it down! Had to take a photo though – he looks so put out! 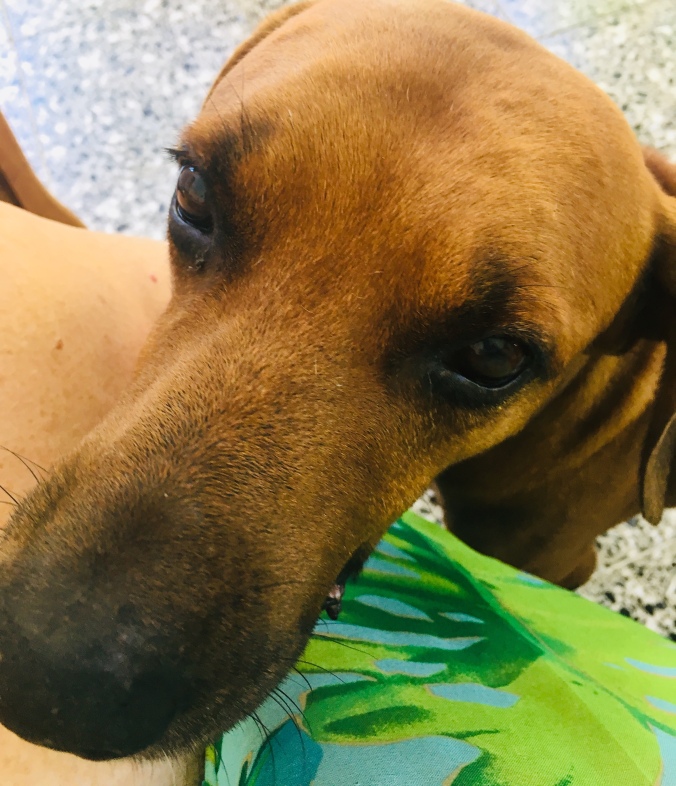 Steve has read in our Lonely Planet guide that you should always have a Plan B in Cuba. And so it is that we go to the bus station, again, to try and buy a ticket for travelling to Camaguey on Monday …. even though we have booked one of the smart yellow taxis. We manage to buy two tickets and so our back up is in place, in case the taxi (as yet unpaid) does not turn up. ‘Be prepared’ is our motto!! From there we take a ride up to the Santa Ifigenia cemetery, a recommended place of interest. We watched the changing of guards on arrival which was quite a spectacle – can’t beat a good old goose-step! We were led first to the burial spot of Fidel Castro, the man himself. His request for no headstone or monument has been abided by … he is in fact buried under a rock and his name sits on discreet signage. We were then left to walk freely around the cemetery with its spectacular graves, headstones and monuments (our friend Jeff would love it!) – evidently no expense spared at the end of their lives! Vultures circled low overhead adding to the ethereal atmosphere. 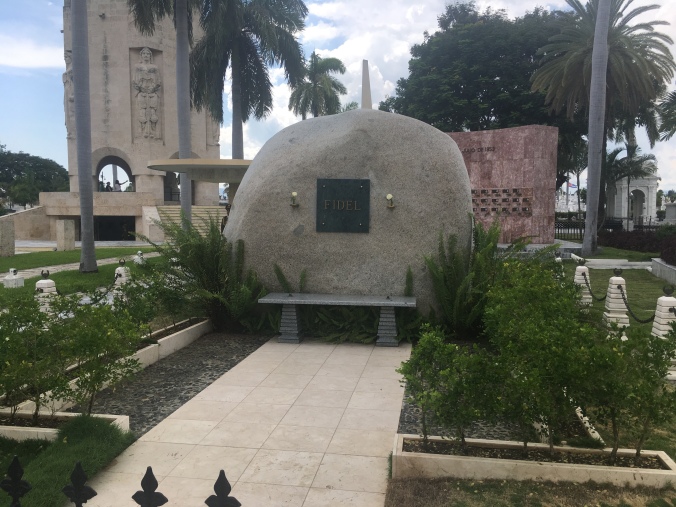 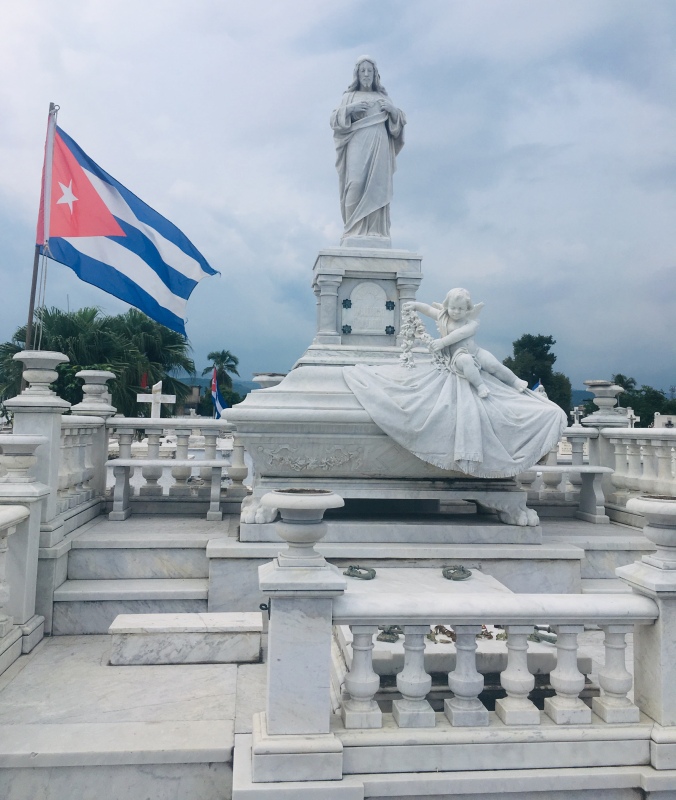 And after that spot of culture it was time for culture of another kind … music and beer. We made our way to the Plaza del Dolores where our American friends were playing. Even had our portrait drawn by a very shaky old local chap – his eyesight clearly needed some attention!! 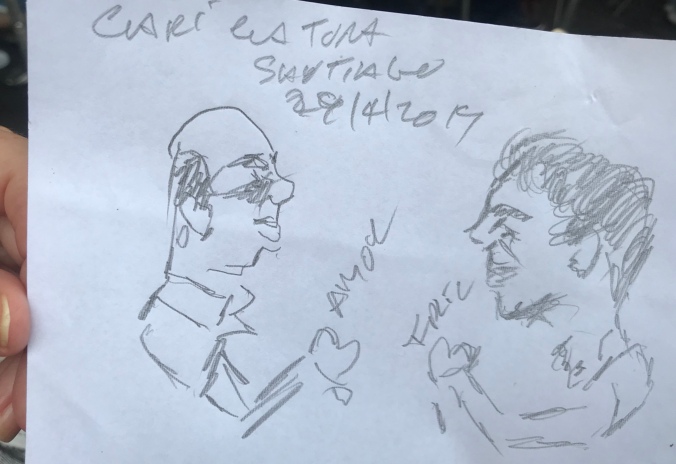 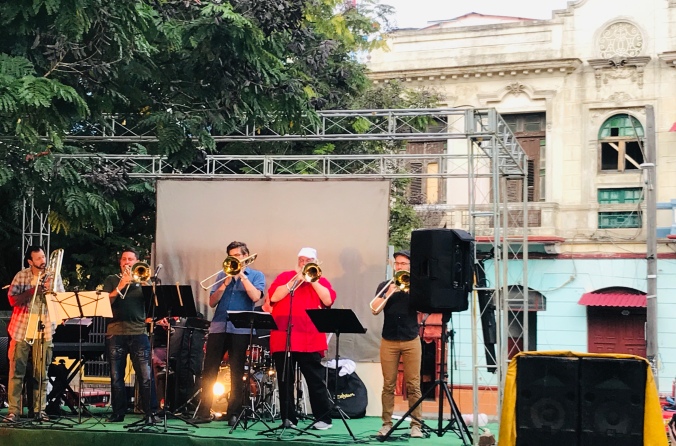 Sat and chilled and appreciated the trumpets, trombones, saxophones and flutes for a couple of hours until our tummies were calling out for food. Found a nearby restaurant and actually managed to successfully order and enjoy the food – pork and rice for me and seafood paella for Steve.

As it was our last day we left enough time for a final drink at the Hotel Casa Grand which had become our safe spot in the city. On nearing it however, we bumped into Odelquis who was out with his father. He was so excited to see us and introduced us to his Dad and of course we all went for a drink together. They readily tucked into mojitos at our expense but we did have a few laughs … and then it was time to go. 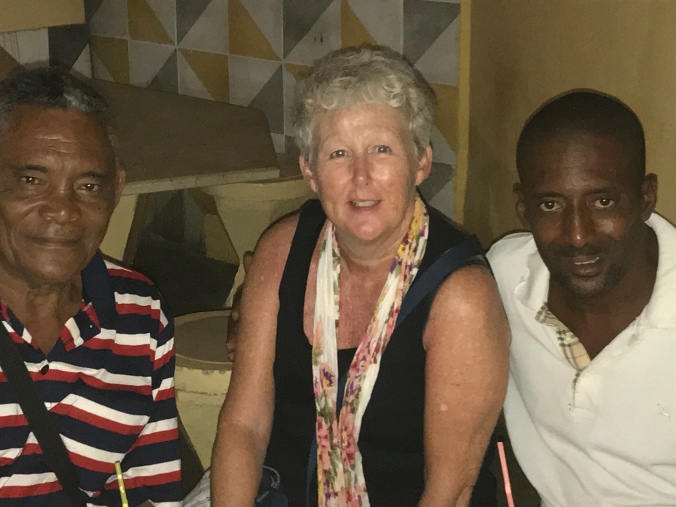 Said farewell to our taxi driver who had looked after us most of the week (he reminded us of our friend Warren)!

And took some photos with ‘Aunty’ and ‘Grandma” before we settled down for our last night of sleeping at ‘Casa Susy.’

It’s been an interesting week – a bit of a culture shock for sure but on the positive, our Casa Particular has been great and the music and dancing a wonderful experience. Let’s see what the rest of Cuba has to offer.