There are so many boat trips and so many islands to visit off Phuket – we had done lots of research and spoke to other guests and made our decision that we would go for the James Bond Island trip – we knew it involved some kayaking hence the commencement of our training programme yesterday!

We were told our pick up was 8.30am which on getting to the pick up point changed to 9.30am – gave us time for breakfast anyhow – never know when you might next get to eat!! Turned out positive though as instead of the usual shuttle bus full of tourists from other resorts we had a private transfer in a very luxurious Mercedes Vito – so a direct and comfortable ride to the port. All very slick, greeted on arrival by Ann, our extremely smiley and jokey guide for the day … after a short wait (with shopping opportunities) we were then bused along the pier to our boat – an eye-catching dark wooden boat – looked like a pirate ship. 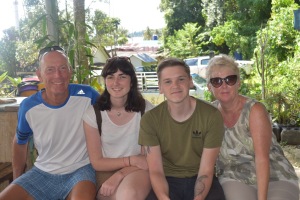 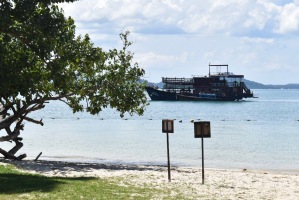 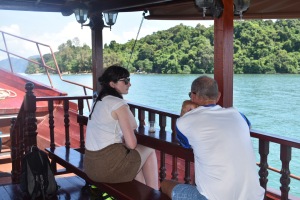 After a 30 minute sail we stopped at Ao Phang Nga National Park – an idyllic island – the stop involved getting off our pirate ship and into a longtail boat which sailed us to the island. The longtail boat rocked worryingly as all the ‘boat people’ were herded on one by one, carefully being positioned to provide ballast at all times…. and then we were zoomed to the shore. Getting off and on the different boats required a fair bit of agility too … not to mention nerve – didn’t mention that in the brochure!! However, the island was stunning and well worth a visit, we swam and relaxed on the golden sands for an hour. 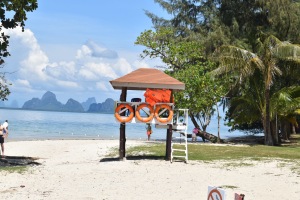 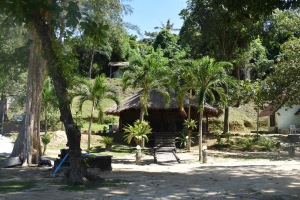 Then back onto the ‘rocky’ longtail boat which ferried us back to our big boat … and as we sailed the next 40 minute stretch, lunch was served … and delicious it was too … fried chicken, onion rings, fish cakes, pineapple fried rice, salad, noodles …. and so much more.

At the next stop there was a team of local Thai villagers waiting in kayaks to row us around some magnificent caves – we were guided into the kayaks straight from the boat. We thought that we would be paddling ourselves, hence yesterday’s training, but local knowledge definitely benefited as we manoeuvred in and out of the caves, being advised when to duck our heads or lie down flat. Definitely one of my favourite experiences ever – relaxing with feet over the edge of the kayak, taking in this spectacle – the sheer height at times created an eerie feel as did the darkness of some of the caves (especially when your forgot to take your sunglasses off)! Steve’s long legs dangling over the kayak meant his feet were dragging in the water … until he realised our ‘rower’ was battling to paddle – as Steve lifted his feet our ‘rower’ picked up speed and a big smile crept upon his face! In his limited English he jovially pointed out shapes in the rocks – Scooby Doo, bulldog, crocodile (that one freaked me out a little!). A fabulous experience – and our little man was thrilled with his tip – waving it to the others in delight!

Climbed back onto the boat for a while and then we jumped off again for a swim. Much frivolity and cheering from the crew as one by one we jumped from the deck. Steve forgot he had his cap on and sunk deep into the water leaving his cap afloat at the top … I said it would have been brilliant if he had managed to pick his cap back onto his head as he surfaced!

After a cheery swim, swapping recorded stories of boat trips where headcounts not completed and swimmers being left marooned at sea, we decided to re-board. An extremely outgoing Frenchman heartily climbed the boat steps and the first of the steps broke off and sunk. Then an Australian lady went to climb up, having to pull herself up onto the second step (as first one now missing) only to break off the second step too – unfortunately scraping her leg on the way down … and landing on top of me as I was next in line – we both were submerged and temporarily tangled up with each other. It was therefore with trepidation and difficulty that we had to pull ourselves up to the next step (at sea level) to be able to get back on deck – luckily it held out. Drama over, first aid applied … poor lady had some grazing and a huge bruise.

Onwards and upwards, we sailed onto the famous landmark of James Bond Island – reviving ourselves with sweet coffee. As luck would have it a storm was brewing … it’s amazing to watch storms move in here … you see them in the distance and they gradually advance your way. Timing is everything …. just as we needed to climb off the big boat onto the waiting longtail boat, the heavens opened, it was torrential with strong winds, thunder and lightning… the lot!! The lady who had been hurt decided she would stay on board so I said I was happy to stay with her (anything to avoid a longtail ride in high waves). I mentioned this to Ann (our giggly Thai host) who replied with a serious tone “No Mama, we will all be safer on the island!” So, with clearly no choice, we again were herded onto the longtail, Ann’s instructions being delivered in more and more of an anxious tone – “hurry now please, keep moving, move to the right, keep steady ….”. Landed on the shore positively drenched … Ann a little calmer by now – helped ‘Mamma’ and ‘Pappa Long Legs’ off the boat with a smile.

The island we landed on enabled us to view James Bond Island (so named after being used in the filming of Man with a Golden Gun – a Roger Moore classic) – quite remarkable despite the desolate weather conditions. There were some shopping opportunities on this island but sadly for the vendors, they had had to cover up their stalls because of the heavy rain …. they were running around selling waterproof coats and waterproof covers for mobiles though – this had clearly happened before! 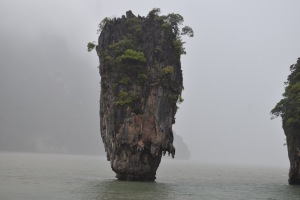 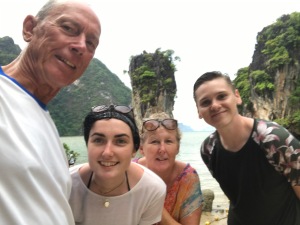 On return to our pirate ship the weather perked up and we started the return sail, eventually drying out. 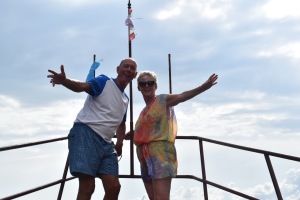 Before our sunset buffet was served, we had some cultural activities – learning to make candle displays with lotus flowers and some Thai dancing. Also had a bit of a singalong – “I love Thailand’ and “Loi Krathong.” 🎶 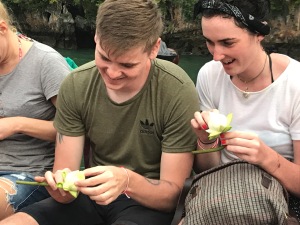 <
fter supper we made a final stop – again by longtail to a small cave – where we lit our lotus candle displays, made our wishes and floated them out to sea. So beautiful.

truly fabulous day – think we made a good choice – would highly recommend it.